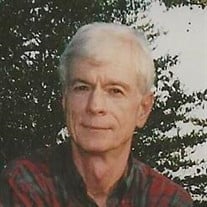 Zane Rex McNutt age 84 went home to be with his Lord and Savior, on March 08, 2019. Rex was born April 14, 1934 in Ft. Payne, Alabama to William McNutt and Laura Rogers McNutt. Rex grew up in Ft. Payne, Alabama where he lettered in football and graduated from Fort Payne High School
In the early 1950's he and his then wife Peggy Tiner moved to Oak Ridge where Rex worked at Union Carbide (later Martin Marietta Energy Systems and Lockheed Martin Energy systems) in a variety of positions. While working full time and raising five children, he attended school at the University of Tennessee and graduated with a Bachelor's Degree in Business Administration. He also became a certified public accountant. After 40 years with the company, he retired from his position as auditor in the Central Accounting Division .
In his early years he was active in the Jaycees and the Oak Ridge Playhouse. In his retirement, he enjoyed the performing arts and often attended plays and supported the Clayton Performing Arts Center at Pellissippi State Community College. He also enjoyed hiking, walking, socializing and going to church.
Rex was raised in the Baptist faith and for many years attended Central Baptist church in Oak Ridge. In his later years, he attended Kerns United Methodist Church.
He was preceded in death by his father, William McNutt; mother, Laura Rogers McNutt; brothers, John McNutt and Bill McNutt and sister Mary Ann Nichols.
He is survived by his devoted daughters and son, Lynn McNutt(Lucio Sadoch), Janet (Dale) Bliven, Pat McNutt (Brian Worley), Kim Holt, Scott (Dana) McNutt; grandchildren, Stacie (Lee) Pace, Livio Sadoch, Fabio Sadoch, Alayna Holt, Bobby (Kelsey) Holt, and Paige Worley; sisters, Nancy (Joe Dell) Baker, and Priscilla Jones; former wife Peggy Tiner; and a host of nieces and nephews , cousins and friends.
Receiving of friends will be held at Martin Oak Ridge Funeral Home on Thursday March 14, 2109 from 5-7pm with a funeral service to follow at 7pm. A graveside service will be held 3:00pm at Glenwood Cemetery in Fort Payne, Alabama on the afternoon of Saturday, March 16, 2019 with the Rev. Joe Dell Baker officiating.
Online messages may be left for the family at www.martinfuneralhomeoakridge.com . Services entrusted to Martin Oak Ridge Funeral Home 865-483-4341

To order memorial trees or send flowers to the family in memory of Zane McNutt, please visit our flower store.