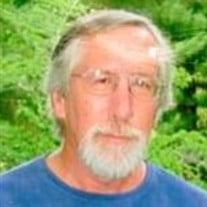 William Robert "Bob" Zopp, age 68, passed away suddenly at his home in Oliver Springs, TN on Saturday, May 8, 2021. Bob was born in Rainelle, West Virginia to William E. and Norma Zopp. Bob was an Air Force veteran and held an Associates degree in Electrical Technology. He lived in Oliver Springs for over 40 years where he loved spending time with friends, riding his Harley, and working with his Kroger family.
William Robert Zopp was preceded in death by his parents, William and Norma Zopp, and his close friend, Sharon B. Burris. Bob is survived by his son Daniel Zopp of Knoxville; sisters Sarah Kimball and Mary Beth Zopp of Sycamore, Illinois, brothers Kevin (Kris) of Illinois and Robert (Dani) Zopp of California; and grandchildren, Hanna and Paisley Zopp; nephew Dustin (Karly) Davis of DeKalb, Illinois, and several cousins, nieces, and nephews.

To order memorial trees or send flowers to the family in memory of William Zopp, please visit our flower store.