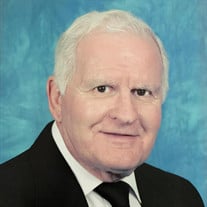 William (Bill) B. Stephens, Sr. passed away peacefully on June 1, 2021. Bill was born on December 23, 1930 in Athens, Tennessee. Following time served in the United States Army during The Korean War, Bill and his wife moved to Oak Ridge, Tennessee. He worked at Y-12 until his retirement at age 62.
Bill was an active member of Moran Baptist Church until he was no longer able to attend. He served in many aspects at the church.
Bill was an avid athlete. He participated in softball and bowling leagues. He also loved NASCAR and drag racing.
Bill is preceded in death by his father and mother (Eldon and Maggie), his brother Ivan, and his son William B. Stephens, Jr.
Bill is survived by his wife Betty of 70 years and son Gary (Vickie). He is also survived by his grandchildren Carissa (Tim) Stephens, Brittany (Morgan) Barcio, and Brenna (Andrew) Buckner.
He has several great grandchildren. He is survived by sister, Jean Wilson, of Athens, Tennessee.
There will be a private graveside service. In lieu of flowers, donations can be made to The Alzheimer's Association of Tennessee. The family would like to thank The Alexander Guest House and Amedisys Hospice for their care.

To order memorial trees or send flowers to the family in memory of William Stephens, please visit our flower store.