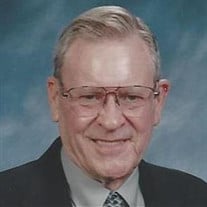 William Walker Reynolds, Jr.
ORHS Graduate, Air Force Veteran
William Walker (Bill) Reynolds, Jr., age 86, of Oak Ridge, Tennessee passed away Friday, May 26, 2017, at The Water's in Clinton, Tennessee.
He was born on December 17, 1930 in the Gobi community of Lancing, Tennessee to parents William Walker Reynolds Sr. and Edith Chambers Reynolds. He moved to Oak Ridge in 1943 with his parents when his father began working in the personnel office at Tennessee Eastman Company. During his youth, Bill was active in Boys Scouts and the Order of the DeMolay.
Bill was a 1949 graduate of Oak Ridge High School where he was part of the varsity track team coached by Ben Martin. He was also a member of the Letterman's Club, Student Council, and the ORHS band. Later in life he was active in the ORHS Booster Club and served as Treasurer for several years in the 1970's. He was also active in the Reunion Committee of "Those Who Climbed the Hill", referring to the ORHS graduates who attended ORHS from 1944 to 1951 when the high school was located at the top of Blankenship Field.
He attended the University of Tennessee from 1949 to 1950 where he was on the track team and a member of Phi Sigma Kappa.
On November 8, 1952 Bill married Carol Elliott (ORHS Class of 1951). After their marriage, Carol followed Bill into military life. They traveled the United States and overseas together while adding to their family. From 1954 to 1960 they had three children, Melissa (Lisa) Ann Reynolds, William Walker (Billy) Reynolds III, and Melanie Carol Reynolds. Once they moved back to Oak Ridge, Bill and Carol became members of Covenant Presbyterian Church.
In January 1951, he enlisted in the United States Air Force as a private and went on to serve for 21 years and retired in 1972 with the rank of Master Sergeant. His career was in the education and training areas. During his time in the Air Force, Bill completed his Bachelor's Degree in General Education from the University of Nebraska, Omaha on August 31, 1966.
He reported to Basic Training in 1951 at Lackland AFB in San Antonio, Texas, he then went to Camp Gordon, Georgia for Air Police training. While at Camp Gordon from 1951-1952 he was a Flight Chief and then Field 1st Sergeant. His next assignment was at Parks AFB in California as a Tactics Instructor from 1952 to 1956. In 1956 he went to Incirlik AFB in Turkey, when he returned his next assignment was at Eglin AFB. In 1960, he had another assignment in Turkey. When he returned, he went to Goodfellow AFB in San Angelo, Texas where he worked in the Education Center until 1968 when he was assigned to RAF Chicksands in England. At Chicksands, Bill was the Manager of the Education Office. In 1972, he retired from the Air Force and returned to Oak Ridge.
In 1974 Bill went to work for the Tennessee Department of Employment Security. During this time he became the Manager of the Job Services office until his retirement in 1994 after 20 years of service.
Bill loved spending time with family and friends. He especially loved getting visits from his grandchildren and great-grandchildren. He also had many hobbies and interests. He loved fishing, reading and watching old westerns, feeding birds and birdwatching, gardening, woodworking, and history. He especially loved animals and all his pets, grand-dogs and cats, and the neighborhood dogs who would stop by to see him on walks with their owners. He was also a Scout Master for many years.
He was preceded in death by Carol Reynolds his wife of 56 years, his son William Walker (Billy) Reynolds III, his parents, and a niece Robin Kay Elliott.
Mr. Reynolds is survived by his daughters, Lisa Witt and her husband Bill, of Clinton; Melanie Braden and her husband Steve, of Oak Ridge; Grandchildren, Ben Witt of Oak Ridge; Alisha McCoy and her husband Asa of Katy, Texas; William Walker Reynolds IV (Will) and his wife Amy of Brookshire, Texas; Jessica Braden of Nashville, Tennessee and Jared Braden of Oak Ridge; Great Grandchildren, Jordan Vera of Katy, Texas; Ashton McCoy of Katy, Texas; Jake Witt of Oak Ridge; Ty Witt of Oak Ridge; Chloe Reynolds of Brookshire Texas; Brynlee Reynolds of Brookshire, Texas; a brother-in-law Glenn Elliott of Oak Ridge; a special cousin, Bobby Reynolds and his wife Dee of Franklin, North Carolina. Several other special nieces, and cousins. Victoria Edwards was a very special friend, companion, and his care giver. Gina Lee and Alexis Whitehurst were special friends, and neighbors.
A special thanks from the family to Canterfield of Oak Ridge and The Water's of Clinton for the wonderful care they have provided to our father over the years.

To order memorial trees or send flowers to the family in memory of William Reynolds Jr., please visit our flower store.