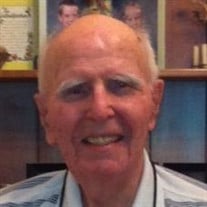 The family of William (Bill) Patrick Kelleghan. announce his peaceful passing on December 12, 2016 at the age of 99, with his family by his side.

He is predeceased by his beloved wife Ruth, his parents, William Patrick Kelleghan II and Minnie (Mautner) Kelleghan, and two brothers Robert and Vincent and his nephew Bobby.

Bill was born in New York City, New York on November 3, 1917. He grew up in the Bronx and loved all things NY---his New York original cheesecake, Jones Beach, Coney Island and the Yankees. He achieved Eagle Scout rank in the Boy Scouts of America.

He tested into The City College of New York and attended The Cooper Union prior to being drafted into the U.S. Army on October 23, 1941 at the age of 23. For three years, he was stationed in the European Theater of Operations during World War II. He was responsible for the running and operation of a 1000 bed hospital in Belgium and in the front lines of the Battle of the Bulge. He was stationed in Exeter and London during the bombings and also spent time in France. He was discharged on 01/10/1946, having attained the rank of Captain.

After serving in World War II, with support from the GI Bill, he attended and graduated from Tufts University in 1948 with a degree in Civil Engineering.

He worked for the Union Carbide, Shippingport Atomic Power Station, and the Kingston Steam Plant. His career was with the Tennessee Valley Authority on projects to provide affordable electric power to the area. Projects included the Melton Hill Dam, Guntersville Dam, Browns Ferry Nuclear Plan, consultant for the Breeder Reactor program, Phipps Bend Nuclear Plant and in the main TVA offices in Knoxville, TN. He retired in 1981 from TVA as a Project Engineer after a 30-year career.
After retiring, he moved back to Oak Ridge, TN with his beloved wife "Ruthie", who passed away much too young. He missed her every day for 24 years. He gave Michael and Ann unconditional love and steadfast support. He was an avid reader (and when his eyes gave out switched to listening to audio tapes), and he delighted in his two cocker spaniels. Bill enjoyed working in his basement "shop". He often invented items in his workshop to help make his life easier (a base for his chair, a stand for his MP3 player), helped the neighborhood child build a go cart for his boy scouts project, a "bridge" project with Gordon and painting his bathroom "bright pink" with Alison. His greatest joy was spending time with his family.

He loved living in Oak Ridge, TN; Bill walked the loop at the Oak Ridge Library for years and attended mass at St. Mary's Catholic Church every Sunday. He was able to stay in his home until age 97, and received loving care at NHC HealthCare in Oak Ridge, TN and, for the last two years, was a resident of Woodcrest at Blakeford in Nashville, TN.

Bill Kelleghan was a beloved and devoted husband, father, grandfather, son, brother, uncle, great uncle and friend. He was a devout Catholic, had a strong faith in God, provided loving care for his parents and his wife during their prolonged illnesses. He will be greatly missed.

The family wants to thank his wonderful caregivers who greatly enhanced his quality of life.

The family requests that any memorials be in William Kelleghan's memory in the form of donations (checks made payable to City of Oak Ridge, Public Library) and mailed to:

To order memorial trees or send flowers to the family in memory of William Kelleghan, please visit our flower store.