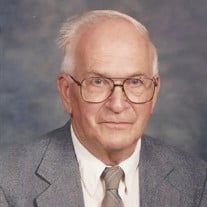 Willard Grant Norton passed away March 11, 2017. He was 99 years old. He was born in North Scituate, Massachusetts, on May 17, 1917, to Lester Reed Norton and Helen Dewees Souder Norton. He had one sister (deceased) and one brother, who was killed in Italy during World War II. Because his father was a reverend, he lived his early years in many states, including New Jersey, Maine, Pennsylvania, and Vermont. He had a passion for math and excelled in all his classes. He received his bachelor's degree from the University of Vermont. After graduation he joined the Army Air Corp, where he became a staff sergeant. He was stationed in California, where he met and married Martha Isabelle Monk, who passed away in 2016. They were married for 71 years! After his service, they moved to Tennessee, where he attended the University of Tennessee and acquired his master's degree. While he was still working on his master's, he was recruited to work in Oak Ridge on the Manhattan Project. He worked at the K-25 Plant for 36 years before retiring in 1983. He had great love for the First Baptist Church and was present when they turned the first shovel of dirt to build on the current location on the Turnpike at Lafayette Drive. He was part of the choir and taught children's Sunday school for many years. He also had a great heart for the Agape Center at FBC and contributed many groceries and much money. He was an avid fisherman and toward the end of his life spoke of "getting well" so he could go fishing. Willard leaves behind three children: Russell M. Norton, Johelen (Norton) Stephenson, and Willard E. Norton. He also leaves four grandchildren: Devin Stephenson, Cayla Dickenson, Kent Norton, and David Norton. There will be no service at this time, but a memorial will be planned for some time in the future, possibly on what would have been his 100th birthday.

To order memorial trees or send flowers to the family in memory of Willard Norton, please visit our flower store.