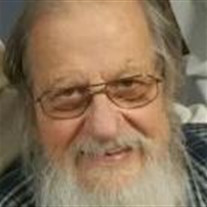 Wayne Douglas Sadler born September 26, 1936 left his earthly body and went to his eternal body on January 20, 2018. Wayne has no surviving immediate family members and was predeceased by his father Jacob Jonathan Sadler, mother Jimmie Lee Sadler and sister Melba Jean Splawn. Wayne contracted spinal meningitis as a baby and consequently lost his hearing and was deaf for life. He also was not able to walk until later in his young life after his mother encouraged him to swim to strengthen his legs. After he learned to walk he never looked back. He played football at the Knoxville School for the deaf. He loved to scuba dive and was an avid outdoorsman. He represented the United States in the 1965 Deaf Olympics held in Washington DC and placed 4th in doubles tennis and also competed in singles tennis. Wayne loved all animals but in particular was fond of dogs, sharks and snakes. Wayne also was very good at drawing and loved spending time at Shoney's in Oak Ridge drawing little cartoons for the children that were there each night. A chance acquaintance in Oak Ridge reported that the image of Big Ed on the window of Big Ed's Pizza was one of Wayne's sketches. There is no graveside service or memorial service planned. However, Wayne cared deeply about the deaf community and anyone that was challenged with a physical disability. Wayne requested that anyone who wanted to honor his life should make a donation to the Special Support Person Fund of the Knoxville Center for the Deaf located at 3731 Martin Mill Pike, Knoxville, TN. Online messages may be left at www.martinfuneralhomeoakridge.com . Services entrusted to Martin Oak Ridge Funeral Home 865-483-4341 Any questions can be directed to his cousin, Paul Sadler at (865) 742-1956.

To order memorial trees or send flowers to the family in memory of Wayne Sadler, please visit our flower store.