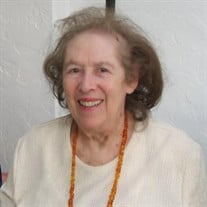 Rosalind Gene Blumenthal Schmorak passed away on March 13, 2021 at age 97. Rosalind had been a long-time resident of Oak Ridge and a resident at NHC HealthCare, Oak Ridge since late 2018.
She was born on October 12, 1923 and raised in New Rochelle, New York, the daughter of a prominent attorney and political activist Eugene Blumenthal.
In 1963, on her birthday, Rosalind married Dr. Marcel Schmorak who, until his retirement in 1990, had a long and distinguished career as a physicist at Oak Ridge National Laboratory. Rosalind and Marcel remained at each other's side until his death in October, 2018.
In 1999, Mrs. Schmorak was awarded the Medal of Freedom by the 54 Republican members of the United States Senate. It is the highest honor the Republican Senate can bestow.
Rosalind Gene Schmorak was an accomplished, published poet and a reader for the Recording for the Blind for over 25 years. She was member the Tennessee Arts Commission and Tennessee Writers Alliance as well as of the ORCMA Guild and the Art Center Guild. She was a graduate of the Leadership of Oak Ridge Class of 1994.
Rosalind and Marcel Schmorak were long-time members of the Jewish Congregation of Oak Ridge.
Mrs. Schmorak will be missed by a remarkable wide, diverse circle of devoted friends who went out of their way to keep up with her even after the corona virus hit.
She is survived by eight nieces and nephews who looked up to her as the last family member of the "greatest generation." She is also survived by her late husband Marcel's sister and other members of his family in Israel.
The family expresses appreciation to NHC Healthcare, Oak Ridge and to DayBreak Personal Services for the committed care and service provided to Rosalind.
The burial to be held on March 14 at 3 pm at the Beth El Jewish Cemetery.
In lieu of flowers, donations may be sent to the Jewish Congregation of Oak Ridge, P.O. Box 5434, Oak Ridge, TN 37831

To order memorial trees or send flowers to the family in memory of Rosalind Schmorak, please visit our flower store.