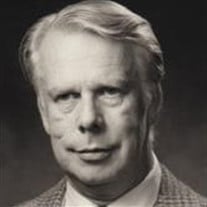 Rolf Colderup Rosenvinge 87, was born in Chicago, Illinois on July 17, 1931, of Norwegian immigrant parents. Rolf passed away on July 13, 2019 at Fort Sanders Medical Center. Rolf's father hailed from Oslo, Norway and his mother was from Hønefoss, Norway. While Rolf was still a toddler, he returned to Norway with his mother to live for several years, and as a result Norwegian was his first language. He returned to Chicago, graduating from Steinmetz High School and then the Illinois Institute of Technology, with a degree in civil engineering. During that time he was also involved with three fraternities; Tau Beta Pi (Eng), Chi Epsilon (CE) and Theta Xi. In 1953, he started his career at K-25 in Oak Ridge, TN and two years later, joined the Navy Civil Engineering Corps, where he was stationed in Cubi Point in the Philippines and New York City at the Third Naval District Headquarters, serving for three years. While in New York, he met then married his wife "Judy" Julia Mae Wilson Myers. They were wed at the "Little Church around the Corner" on November 28, 1957. Rolf returned with his bride to Oak Ridge to raise his family. At first he worked at K-25, then in 1961 he transferred to Y-12, to work for the United States Air Force and Navy, as well as NASA, where he helped design the "Rock Box" for the Apollo 11 moon landing. Both he and Judy enjoyed traveling through the world and were avid bridge players. Rolf was an active member of The Sons of Norway "Vikings of the Smokies" chapter. Rolf is preceded in death by his parents, Reidar V. K. Rosenvinge and Harda M. (Støa) Rosenvinge, his wife Judy of 46 years, and granddaughter to Karin Rosenvinge, Anna Burns. He is survived by his sister Ella Rosenvinge; her three daughters, Debbie, Donna, and Dana and their families. His three children; Karin Rosenvinge, of Knoxville, TN; Rolf Eric Rosenvinge, of Oak Ridge, TN; Susan Ahlberg and husband Gary of Wilmington, NC. Also by four grandchildren; Hannah M. Rosenvinge, Jensen Ahlberg, Carmen Ahlberg, and Kai Ahlberg, and four great grandchildren; Isaac, Christian, Raiden, and Adalynn. Plus many beloved friends and colleagues. May he rest in peace with Gods eternal love!

To order memorial trees or send flowers to the family in memory of Rolf Rosenvinge, please visit our flower store.