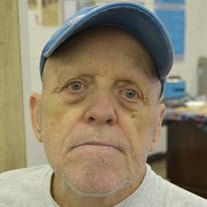 Roger D. West age 78 is in the care of Martin oak Ridge Funeral Home. He passed away March 7, 2019 at the Emory Valley Home in Oak Ridge, Tennessee. Roger was born March 21, 1941 in
Salt Lake City to Roland and Zola West. He attended the Army Dependent School and the Louise Lombard School for Special Needs. He spent the last 30 years at the Emory Valley Center in Oak Ridge, Tennessee and loved by everyone there. Also, he said he didn't believe in Santa Clause, he just wanted the presents. Roger was an avid fan of WWF Wrestling and enjoyed watching all kinds of Horror Movies and most of all spending time with his friends. He was preceded in death by his parents: Roland and Zola West, brothers: Roland J. West and Gerald West. Roger is survived by his sister: Patricia West of Oak Ridge, Tennessee. Visitation and viewing will be from 12pm until 2pm Tuesday March 12, 2019 at the Martin Oak Ridge Funeral Home with a funeral service following at 2pm in the chapel with Anthony W. South officiating. Online messages may be left at www.martinfuneralhomeoakridge.com . Services entrusted to Martin Oak Ridge Funeral Home 865-483-4341

To order memorial trees or send flowers to the family in memory of Roger West, please visit our flower store.