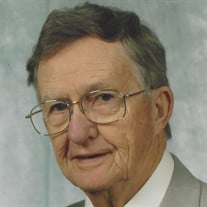 An avid Oak Ridge High School Wildcat fan, Bob was a member of the first four-year class to graduate from Oak Ridge High School in 1948. He was a drummer for the Wildcats and joined the local scout group. Very proud to be an Oak Ridger, on the night of the end of World War II, Bob was selling newspapers and is the boy in the striped shirt pictured in the Ed Westcott "War Ends" photo. Following high school graduation, Bob served in the United States Navy from 1949 to 1953 and served in the Korean War for one year.

In March of 1953, Bob returned to Oak Ridge with his wife Doretha and joined the Oak Ridge National Laboratory Chemistry Division. In 1959, Bob joined the Fusion Energy Division and traveled the world during his 39 year career. Bob, a vacuum technologist, enjoyed speaking and presenting papers about "nothing" at American Vacuum Society conferences, frequently joking that he was an "expert" in nothing. Bob worked on several projects during his employment and saw many changes over the years. Some of these projects include: Physics Tet Facility, Elmo I, Elmo II, Canted Mirror, Elmo Bumpy Torus and Radio Frequency Test Facility.

A member of Kern United Methodist Memorial church, Bob enjoyed Wednesday night dinners, fellowshipping with friends and being an active member of the adult choir for many years. Additionally, Bob was very passionate about service to the community and was a long-time volunteer counselor for the Seventh Step International Program at the Morgan County Regional Correction Facility. He enjoyed fishing and playing golf with longtime friends Bill Hicks, Morris Osborne and the late Hugh Caudill. Nothing made Bob happier than being with his grandchildren, who he loved watching play baseball, dance and compete in cross country/track meets.

Graveside service will be 10 a.m. Saturday Dec. 3, 2016 at Oak Ridge Memorial Park. Online messages may be left for the family at www.martinfuneralhomeoakridge.com . Services entrusted to Martin Oak Ridge Funeral Home (865) 483-4341.

To order memorial trees or send flowers to the family in memory of Robert Livesey, please visit our flower store.