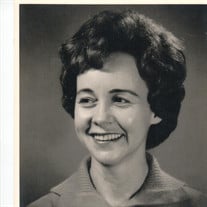 Mrs. Somers was born in Mary Helen, Ky on April 23, 1928. Robbidean went to the Evarts High School, Evarts, Kentucky where she met James Edward Somers in 1943. Robbidean graduated Evarts High School in 1947 and continued to Bryant Business College in Louisville, Kentucky. After James completed his military service, they were married in March of 1949. They remained married for 70 wonderful years.
Robbidean Somers drove an Oak Ridge school bus for 11 years and worked at Y-12 for 18 years as a security inspector until she retired in 1994. Robbidean Somers moved to Oak Ridge 64 years ago and was a member of St. Mary's Catholic Church.

Visitation with the family will be from 5-8 pm Monday March 18, 2019 at Martin Oak
Ridge Funeral Home

Funeral mass will be 11:00 am Tuesday March 19, 2019 at St. Mary's Catholic Church in Oak Ridge with interment to follow at Anderson Memorial Gardens in Clinton.

James and the family would like to recognize and thank Lynn & Linda Cox and Jim & Caroline Monger for the help, love, and support during this tough time. Thank you.

To order memorial trees or send flowers to the family in memory of Robbidean Somers, please visit our flower store.