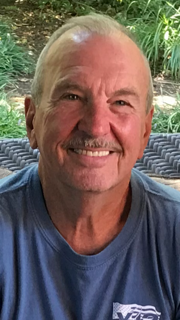 With broken hearts, we announce the sudden passing of the absolute BEST husband, BEST dad, BEST granddad that this world could ever know! He lived life to the fullest every single day of his life, including the day he passed. In true Dicky fashion, he met his Lord and Savior on the golf course. (We know he will be bragging about that in heaven…ha).
Richard ‘Dick’ James Hochanadel was born March 1, 1952 here in Oak Ridge, TN to Clarence and Helen Hochanadel. He was the 4th of 8 children. He attended St. Mary’s Catholic School, Jefferson Junior High, and Oak Ridge High school where he graduated class of 1969. It was there in his sophomore year that he met the love of his life.

He attended UT Knox for a year and PROUDLY enlisted in the US Navy, serving 4 years.

It didn’t take him long to marry his high school sweetheart, Diane Wallace (class of ‘70) and began their almost 51 year adventure together.  They were stationed in Jacksonville, FL and Virginia, VA where they had their son Bryan.

Leaving the Navy, they returned home to Oak Ridge where they had their daughter Leigh (Lei-Lei). He began his 35 year long career at the Oak Ridge plants while also earning his BS from Tennessee Wesleyan and retired as Director of Maintenance at y-12.

He always said he wanted to retire early so that he could play with his 3 granddaughters, so in 2010 he did just that!  If he wasn’t 4-wheeling, hiking, biking etc! etc! etc! With his family, you would find him caring for his elaborate ‘secret garden’, woodworking, (etc, etc, etc) or serving a friend in need. He loved to go the extra mile for people and had the gift of making everyone feel ’known’.

Dick’s faith grew MIGHTILY every year and his walk with Christ was evident to all!

Dick would want us to celebrate the amazing life he lived and where he is now, no doubt greeting others at Heaven’s gates and introducing them to everyone, making them feel at home.  There will be a Celebration of Life service on Saturday, May 14th at 11:30 am at Christ Community Church in Oak Ridge.  Being a good veteran, a military graveside service will follow at Anderson Memorial Gardens, open to everyone.

To order memorial trees or send flowers to the family in memory of Richard Hochanadel, please visit our flower store.