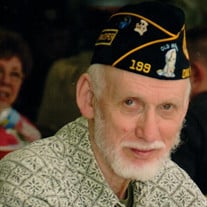 Raymond James Fraser age 87 is in the care of Martin Oak Ridge Funeral Home. Raymond passed away Thursday October 10, 2019 at his home in Oak Ridge, Tennessee. He was born in West Hartford, Connecticut on August 29, 1932 to James Matthew Fraser and Agnes Eckel Fraser and was of the Roman Catholic Faith and was a member of St. Mary's Catholic Church in Oak Ridge, TN. Raymond served our country in the United States Air Force from 1951-1955 with various state-side assignments as well as French -Indo China and Japan and was awarded the Korean Service Medal and National Defense Service Medal. He obtained his Bachelor's degree in chemical engineering from Tri-State University and a Master's degree in Library Science from Syracuse University, and was employed with K-25 and Y-12 as an Information Specialist for 37 years from 1966 until retirement in 2003. Raymond had many interests including gardening and bluegrass music, but most of all his love and enjoyment of his grand and great grandchildren. He was a member of the American Legion (Atomic City Chapter) He was preceded in death by his parents, James and Agnes Fraser, sister, Joan Targonski.
Raymond is survived by his wife Virginia, 6 children, 13 grandchildren and 2 great grandchildren sisters, Peggy, Babs, and Kathy and many nieces and nephews.
A funeral mass will be held 1:00 pm Saturday October 12, 2019 at St. Mary's Catholic Church 327 Vermont Ave, Oak Ridge, TN 37830 Online messages may be left for the family at www.martinfuneralhomeoakridge.com . Services entrusted to Martin Oak Ridge Funeral Home 865-483-4341

To order memorial trees or send flowers to the family in memory of Raymond Fraser, please visit our flower store.