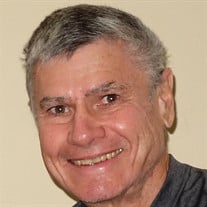 R. Jerome Hayes of Oak Ridge, age 66 passed away on November 25, 2016.
He graduated from ORHS in 1968, The University of Tennessee, Knoxville in 1972 and Memphis State University College of Law in 1975. He was also a licensed contractor for many years.
Jerome was an avid outdoorsman and a member of the Oak Ridge Sportsmen's Association, and was a member of The First United Methodist Church in Oak Ridge. He especially enjoyed hiking, waterskiing, and spending time with his family. He is survived by his wife of 38 years, Laura, son Ryan and daughter-in-law Erin, parents Phil and Mildred Hayes of Oak Ridge, mother-in-law Rita White of Loudon, sister and brother-in-law Linda and Steve Levenhagen of Huntsville, nephews Blake and Alec, and uncle Randal Hayes of Florida. He was preceded in death by grandparents Robert and Golda Hayes and Mae Glover, and will be dearly missed by all who knew him.
Visitation with the family will be from 3-5 pm Tuesday November 29, 2016 at the Martin Oak Ridge Funeral Home with a funeral service to follow at 5pm with Rev. Stella Roberts officiating. In lieu of flowers the family requests that donations be made to Friends of the Smokies at www.friendsofthesmokies.org . in the name of Jerome Hayes.

To order memorial trees or send flowers to the family in memory of R. Hayes, please visit our flower store.