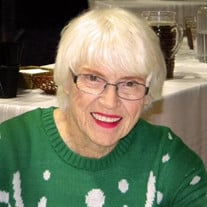 Penelope "Penny" H. Sissom age 80 is in the care of Martin Oak Ridge Funeral Home. Penny passed away at her home June 06, 2019. She was born June 29. 1938 in High Point, North Carolina to Morgan and Amorae Hutchison. Penny obtained a degree in Mathematics from the University of North Carolina and was employed with the City of Oak Ridge as Personnel Director, retiring July 15 2016 after 52 years of service, the longest tenure of any City of Oak Ridge employee to date.
Penny's passion for community engagement and leadership skills accelerated her career. She was promoted from Personnel Clerk, to Personnel Administrator, to Human Resources Manager, to Personnel Director. She was the first female member of the Tennessee City Manager's Association as well as the first female Personnel Director for a municipality in the state. Penny was also a trailblazer within the Southern Region of the International Personnel Management Association, becoming the first person to progress through all chairs of the organization. During her time with the City, Penny helped organize the school's Student -in-Government Day. She also played a significant role during the successful campaign for a new public library and community recreation center (Civic Center).
Penny enjoyed many hobbies and interests such as University of Tennessee sports, Nascar, of which she attended many races where she had season tickets. She also enjoyed reading and walking. She was preceded in death by her parents and a sister; Geraldine Vance Owen. Penny is survived by her sons; David (Denise) Sissom and Morgan Sissom, Grandsons; Morgan (Molly) Sissom Jr., Bryant Sissom, Granddaughter; Victoria Sissom. Graveside service will be 11:00 am Wednesday June 12, 2019 at Oak Ridge Memorial Park. Expressions of love can be made in Lieu of flowers through donations to Oak Ridge Public Library. Services entrusted to Martin Oak Ridge Funeral Home. 865-483-4341

To order memorial trees or send flowers to the family in memory of Penelope Sissom, please visit our flower store.