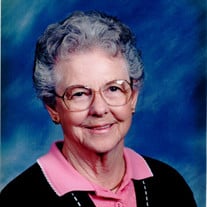 Peggy was born on a farm in Sneedville, TN, and moved to Oak Ridge in 1944 after graduating high school. She worked in multiple capacities for the Manhattan Project and met her husband Milt. Peggy was playing in a basketball game that Milt refereed, and Milt ejected Peggy from the game. After the game, he asked her out on a date. Milt and Peggy were married in 1947 until Milt's death in 1968, and had two children together. Later in life, Peggy met her second husband B. J. through a bowling league. Peggy and B. J. were married in 1973 until B. J.'s death in 1986. Peggy raised her children and lived for many years on Emerson Circle in Oak Ridge.

Peggy possessed a deep and abiding love for athletics, especially basketball. She also played and coached softball, golf, and bowling. She was a long-time, active member of Kern Memorial United Methodist Church of Oak Ridge.

In her 80s, Peggy helped historian D. Ray Smith document the wartime lives and contributions of women in Oak Ridge. She gave multiple interviews, including one that aired on the History Channel. She spoke publicly on her experiences, including lectures at the Y-12 New Hope Center and the Oak Ridge Associated Universities.

Peggy's family would like to thank Amedisys Hospice, the staff of Canterfield Assisted Living of Oak Ridge, Peggy's Kern Memorial family, and multiple treasured friends and relatives for their support.

Graveside services will be held Monday, April 12 at 11am at Anderson Memorial Gardens in Clinton. Martin Oak Ridge Funeral Home is in charge of all arrangements. In lieu of flowers the family requests that donations be given to Random Acts of Flowers, 2936 Middlebrook Pike, Knoxville, TN 37291 or Kern Memorial United Methodist Church, 451 E. Tennessee Ave, Oak Ridge, TN 37830.

To order memorial trees or send flowers to the family in memory of Peggy Stuart, please visit our flower store.