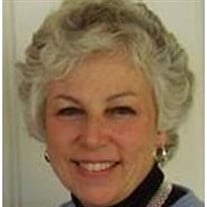 Patricia S. Imperato, 69, of Oak Ridge, TN, devoted wife and mother, and defender of the helpless, passed to her eternal reward on Tuesday, October 18, 2016, after years of a long valiant fight with ovarian cancer. To cherish her memory, she leaves her husband, Nick, daughter Nicole Pappano ( Pete) grandchildren, Luke, Mia, and Cora, her sister Anita Kanzinger (Don) and their children, Todd Kanzinger (Sharon) their children Maile and Ava and Karen Walmsley (Devin) and their children, Ashlyn and Lauren, brother-in-law, Nicky Imperato (BJ) and their children David and Danielle Imperato and many friends. She joins her son Michael in Heaven.

Pat was very active in the Oak Ridge community especially at the Children's Museum, with the Breakfast Rotary and with St.Mary's Church ministries.

In lieu of flowers , donations are requested for two of Pat's favorite charities, Choices Resource Center in Oak Ridge and Catholic Charities a pregnancy crisis center in Knoxville.

To order memorial trees or send flowers to the family in memory of Patricia Imperato, please visit our flower store.