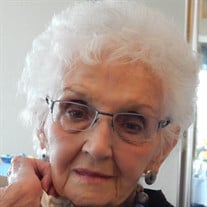 Nancy M. Feldman passed away peacefully at home on January 28, 2017 at the age of 90. She has left a legacy of love that will resonate with family and friends for generations to come. Her delicate manner, quick wit, open heart, and unending thoughtfulness were gifts to all who knew her and will be especially unforgettable among those to whom she was closest. This extraordinary Coca-Cola-loving, ACLU card-carrying, chocolate cake-making, bacon-eating vegetarian (shhh!), sweater-knitting, tea-drinking, bridge-playing woman lived her life with grace, class, and poise, leaving her mark on all who were lucky enough to cross her path.
She was born Nancy Ann McCarty in Atlanta, Georgia on August 30, 1926 to parents Lyle and Ethel (née Goodall). After her father's sudden death when Nancy was just nine, Nancy moved from Buffalo, New York, with her mother and brother to South Bend, Indiana, where she attended and graduated from Riley High School and met Melvin J. Feldman, whom she married on June 11, 1945.
Mel's enrollment in the Navy took them to Edenton, North Carolina, and then to West Lafayette, Indiana, where Mel attended Purdue University. Son David was born in South Bend in 1947, and daughter Cynthia in West Lafayette in 1949. In November 1950, they moved to Oak Ridge, Tennessee for Mel to start work at the National Laboratory, where daughter Martha was born in 1953. Over the following years, the family lived in Pittsburgh, Pennsylvania, Idaho Falls, Idaho, and Chicago, settling in Idaho Falls until 1975. Sons Ben and Matt were born in Idaho Falls in 1959 and 1962, respectively.
Nancy graduated from the nursing program (LPN) at Sacred Heart Hospital in 1972 and enrolled in the RN program at Idaho State University from 1973 to 1974. Moving back to Oak Ridge in April 1975, Nancy attended the University of Tennessee, where she graduated with her bachelor's degree in nursing in 1978. She enjoyed working as a nurse at Oak Ridge Methodist Medical Center, where she made many new friends and touched countless lives. After retiring, she volunteered as a school nurse at Hardin Valley Elementary School in Knoxville where her grandsons attended.
When she wasn't working, she was traveling with Mel, hosting and visiting family, and enjoying her garden. She and Mel traveled extensively in Europe, Asia, and Australia, including a six-month stay in Cronulla, Australia. Nancy embraced her role as grandmother, knitting something for each of her grandbabies and providing moral support to their parents. She spent time with each child, grandchild, and great-grandchild and had a way of making each feel uniquely special.
Her thirst for knowledge was unquenchable. She devoutly followed current events and politics, and was enrolled in continuing education classes until her passing. For her 90th birthday last August, her entire family and many friends came together in Oak Ridge in celebration, where she managed to beat everyone at Oh Hell! and Scrabble.
Nancy is preceded in death by her husband of 54 years, eldest son David, and brother Lyle McCarty.
She is survived by her children, Cynthia Daniels (Ron), Martha (Hobart Taylor), Ben (Jenna Lewis), Matt (Laura), and daughter-in-law Carol (married to David), 13 grandchildren, 12 great-grandchildren, brother-in law Daniel Feldman (Naomi), and sister-in-law Rita McCarty.
Heartfelt thanks to Alice Fishman, Mary Luttrell, David and Sue Heald, Barbara and Phil Gardiner, Bobbi Cantor, Blanche and Larry Dresner, and Janice Huffine for their love and support.
A celebration of Nancy's life will be held on Saturday, February 11 at 2:00 at the Oak Ridge Unitarian Universalist Church, 809 Oak Ridge Turnpike, with reception following. Per her wishes, instead of flowers, please make a donation in Nancy's name to the ACLU, Planned Parenthood, or Remote Area Medical ( www.ramusa.org ).

To order memorial trees or send flowers to the family in memory of Nancy Feldman, please visit our flower store.