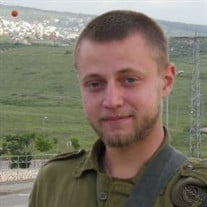 It is with great sadness that we share the passing of our beloved son and brother, Maxim Fridman.

Max was born in Moscow, Russia on May 8, 1987. As a child, he was remarkably precocious. Despite hating homework, he always effortlessly aced his tests, demonstrating an exceptional gift for even the most advanced echelons of physics, mathematics, and computer programming. He also had a mischievous side and frequently brought wild animals home in the hopes of domesticating them, to the great delight of his little sisters and a somewhat more mixed reception from his parents.

Over time, he developed into a deeply compassionate and entrepreneurial adult, eager to help those around him and to make the world a kinder, funnier, and easier place. After studying physics at the University of Tennessee, during which time he also founded and ran a computer diagnostics business, Max left the States to join the Israeli army as a volunteer. He quickly rose to the rank of sergeant before concluding his service term and was even transferred to the famous Golani Brigade combat unit, despite the fact that volunteers are supposed to remain exclusively in non-combat roles. While living in Israel, he fell in love with Kateryna Samodina, whom he eventually married after the two moved to America together.

Later, Max would co-found Unseen Entertainment, LLC, an entertainment company that allowed him to channel and share his love of music. There, he helped organize music festivals, parties, and other community events, as well as co-found the non-profit Secret City Cyphers, which was awarded "Best Nonprofit" and "Best Concert Series" by Knoxville's Blank Newspaper.

Max approached the complexities of life with a disarming earnestness and tenacity. He lived honestly, fearlessly, and intensely, experiencing more in his 32 years than most people could with 100. He has lived in Moscow, Kyrgyzstan, St. Petersburg, New Jersey, Ukraine, Tennessee, Israel, Alabama, and Las Vegas.

Max tragically passed away at home in Oak Ridge, Tennessee, on the afternoon of December 24, 2019. He is survived by his parents, Tamah Fridman and Andrey Gorin; his little sisters, Dasha and Yulia; and his ex-wife and dear friend Katya. Visitation with the family will be 2:00 till pm Saturday December 28. 2019 with a Celebration of Life following at 4:00 pm. at Martin Oak Ridge Funeral Home 1017 Oak Ridge Turnpike Oak Ridge, TN

To order memorial trees or send flowers to the family in memory of Maxim Fridman, please visit our flower store.