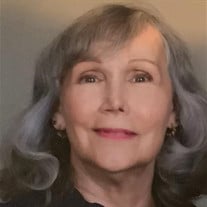 Kathy Wilson (Mary Kathryn Wilson)
Kathy Wilson, age 75, passed away unexpeditly early in the morning on December 7, 2019, at the Methodist Medical Center in Oak Ridge.
She was born Mary Kathryn Devor to Dorotha and Cecil Devor in Missouri but grew up in Wichita, Kansas. She was known to her family and friends as Kathy. She graduated from Southeast High School in Wichita and held a college degree in Contemporary Business Management. She met her husband when he was stationed in the Air Force in Salina. They were married in February of 1963 in Salina, by her Grandfather and her Uncle, both Methodist Ministers. She was blessed with two children and later two grandchildren. They moved back to Knoxville, Tennessee after their military commitment. Kathy worked for the Miller's Department Store in the accounting department, from there they later moved to Morristown, TN where she was fortunate enough to stay home with her children, allowing her to be heavily involved with her church and volunteer work. Upon moving to Oak Ridge in late 1970's, she choose to return to the workforce working at the DOE Federal Credit Union, then as a TA at Woodland school, she was also a partner in a company working with the government, later she branched out to open her own company, MK Wilson and Associates and a few years after that, she started another company Wilson Scientific Services Inc, which held an AVID contract with ORNL, which she continued to run for over thirty years. She was recognized by Forbes as one of the top 100 small woman owned businesses in the 1990s. She was very active in her church, and was a president of the United Methodist Women at First United Methodist Church, as well as a Stephan Minister for years. She was also a very active member and former president of the Oak Ridge Woman's Club as well as a graduate of the Leadership Oak Ridge program. She often enjoyed the gatherings of her Red Hat Ladies group and their parties. She was always involved in various voluntary capacities with the TN Native American Association, being a Foster Parent with TRACES, working as a volunteer at Methodist Medical Center, an active Altrusa and ABWA member, and was at one time on the board of the YWCA.
She was preceded in death by her parents, her brother (Marion Devor), and her son, Dean Wilson. She is survived by her husband of over 56 years, David E. Wilson, daughter, Dawn Wilson-Hammer, and Grandchildren Wilson Hammer, and Midori Hammer, her brother Michael Gave, (wife Deborah), and many other family and friends.
Services will be held at the First United Methodist Church, 1350 Oak Ridge Turnpike, Oak Ridge, TN 37830
Receiving of Friends will be at First United Methodist Church from 2:30-4:00 pm, with a service starting at 4:00 pm on Tuesday, December 10, 2019.
The Graveside service will be at the Oak Ridge Memorial Park immediately following with family and friends.
In lieu of flowers, please consider making a donation to the First United Methodist Church United Methodist Women on Missions team: checks can be made out to the United Methodist Women.
Martin Funeral home in Oak Ridge will be handling the arrangements.

To order memorial trees or send flowers to the family in memory of Mary Wilson, please visit our flower store.