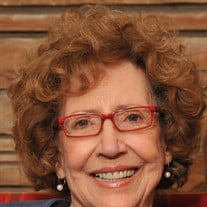 Mary Joan Wiley, age 89, died at home Thursday, August 22, 2019, in Oak Ridge, Tennessee. She was born February 24, 1930 in Parkin, Arkansas, to Jewel and Gene Brewer. She married the love of her life, Sidney J. (Jack) Wiley in Memphis December 18, 1948, and they had five children: Sidney John, Henry Steven, David Charles, William Joseph, and Mary Elizabeth. Joan became Roman Catholic at age 14 and had a lifelong deep devotion to the Virgin Mary.

The family moved to Knoxville in 1956, then to Oak Ridge in 1957, where Jack had started an optometric practice in what was originally Royal Jeweler's. His practice soon expanded to become the Wiley Eye Clinic, where Joan was office manager. She raised her children in Oak Ridge and inspired them to make their marks on the world. She and Jack took many trips together and enjoyed socializing with close friends at the Knights of Columbus. They retired in 1991, but their plans for travel and relaxation were cut short by Jack's untimely death in 1992.

Joan then moved to Atlanta in 1993 to be with Mary Beth and son-in-law Rick Robinson and helped care for grandsons Wiley and Grant. She settled in Farragut July 1999, then moved back to Oak Ridge in 2013. In 2014, she moved into a studio apartment attached to Mary Beth and Rick's home.

Joan spent the last years of her life surrounded by family, long-time friends, cats, and dogs. She was a voracious reader of history, biographies, fiction, the arts, and more. She loved classic movies and westerns, the Food Network, and reruns of "Gunsmoke."

She had a wonderful sense of design and style that she passed on to her daughter and sons. Her studio apartment was built by an award-winning architect and she was able to spend her final days there, surrounded by the forest and birds.

Joan will be fondly remembered for her ability to converse on a wide range of topics, with an opinion always at the ready. She had a quick wit, wonderful laugh, and loving heart. She was adored by her children, grandchildren, brother, and in-laws and will be most remembered for her smile and willingness to help her loved ones in any way she could, while expecting them to do the right thing and make the world a better place.

She is survived by her sons, daughter, and their spouses; nine grandchildren; her brother Gary Brewer; and aunt Neoma Tate.

Special gratitude goes to Beth Lordo of Delphina Home Health who gave support to Joan in the final months of her life with loving caregiving and friendship.

Grave services will be Tuesday, August 27, at 10:00 a.m. at Anderson Memorial Gardens, with a reception following at home. Martin Oak Ridge Funeral Home is in charge of arrangements. In lieu of flowers, the family would prefer memorial gifts to St. Jude Children's Research Hospital.

To order memorial trees or send flowers to the family in memory of Mary Wiley, please visit our flower store.