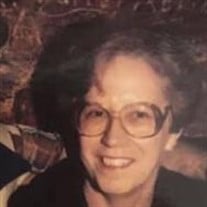 Mary, a coal miner's daughter, was born in Devonia, Tennessee to Minerva (Minnie) Boston Parks Brummitt and Thomas Brummitt on January 15, 1937. She was a high school graduate, earning her GED in 1982. She married her soulmate, Paul Galloway on July 21st, 1958 in Knoxville, TN. She worked as a cashier for White Stores in Oliver Springs and French's in Oak Ridge, and later as a bookkeeper, for K-mart in Oak Ridge, TN.

Her world was her family. First and foremost, Mary loved her family. She loved to travel, and traveled extensively with her best friend, Connie Lawlor, who predeceased her several years ago.

Mary is preceded in death by her husband, Paul Galloway; her mother, Minnie Brummitt; her father, Thomas Brummitt; her sister, Pauline Brummitt Byrge; and brothers, Floyd and John Brummitt.

Mary is survived by her daughter and son-in-law, Joyce and George Brumbaugh; son and daughter-in-law, Paul Galloway, Jr. and Nancy Sullivan; grandchildren, Arlen Galloway and his wife Kate, Jacob Brumbaugh, Avery Galloway, and Amelia Brumbaugh, as well as numerous nieces and nephews.

In lieu of flowers, the family requests that donations be given in Mary's honor to the CADES Adult Day Program, 11020 Roane Drive, Knoxville, TN 37934.

The family of Mary Galloway wishes to extend our sincere thanks to Deborah Bond, wonderful friend and caregiver; and Ruth Smiddy and Alta Ridenour, special friends.

Graveside services will be held at noon on Tuesday, March 31st at Anderson Memorial Gardens in Anderson County with immediate family attending only. A memorial for friends and extended family will be conducted at a later date to be announced. Services entrusted to Martin Oak Ridge Funeral Home 865-483-4341

To order memorial trees or send flowers to the family in memory of Mary Galloway, please visit our flower store.