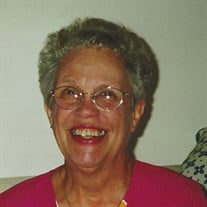 Mareta Craig Browell age 87 of Oak Ridge passed away January 02, 2017 at National Health Care in Oak Ridge. She was born August 06, 1929 at Washington Court House, Ohio to Robert and Florence Craig.
Mareta was employed with The Southern Railway as a hostess where she retired in July 1954. A graduate of Washington Court House, Ohio High School class of 1947 where she was a member of the marching band and played clarinet. Mareta volunteered to be an assistant student teacher in Woodland primary school, and was always an active member of the PTA at Woodland and Jefferson Jr. High School, and always volunteered to participate and chaperone activities. From 1956 until 2016 she provided a welcoming home environment for the family in Oak Ridge.
Mareta was preceded in death by her parents Robert and Florence Craig and a brother R. Bobby Craig. She is survived by her husband; Robert W. Browell, whom she married August 29, 1954; Her sister, Virginia Jefferds of Madison, Wisconsin; and children: Thomas Craig (Kathy), Rebecca Normand, James Thrope (Daniele). Grandchildren: Matthew (Katrina), Michael, Elizabeth, Lisa Brooks (Evan), Jacob Normand, Emilie, and Elise. Also great grandchildren Holden, Jolie Rebecca and Logan. Special friends Carole Yust, Doris Adcock, Pat Ravage Dahlberg. These ladies have provided friendship and support over many years, Pat Ravage played cupid and introduced Mareta and Bob in February 1954. After more than 62 years these two soulmates will meet again in the not too distant future.
A memorial service will be 2:00 PM January 21 2017 at The Chapel on the Hill in Oak Ridge Tennessee with the Rev. Randy Hammer officiating, followed by receiving of friends at 3:00 PM in the fellowship hall

To order memorial trees or send flowers to the family in memory of Mareta Browell, please visit our flower store.