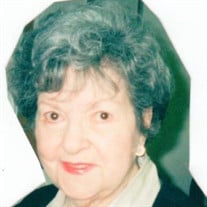 LYDIA MILKOVICH passed away on March 8, 2020, surrounded by her loving family. She was born and educated in Russia but forced to leave her homeland during World War II. She had a whirlwind romance with the love of her life, George, in Salzburg, Austria, where he was serving as a LT in Army Intelligence and was married in June 1946. One of the proudest days of her life was when she became a US citizen after they settled in the US. During George's career, they traveled extensively around the world, including assignments in Trieste, Italy; Taipei, Taiwan; Bremerhaven, Germany, and several places in the US. George and Lydia moved to Oak Ridge in 1983 to be near their daughter Mary, where she became very involved with the duplicate bridge club, becoming a Gold Lifemaster in 2002 and placing first in many tournaments throughout the area. Her fiercest loyalties and unconditional loves were to her family, especially to her husband George, who predeceased her in 2011; her daughter Mary Jellison and husband Jay; granddaughters Lisa (Hall) and Katie(Martin) and great grandchildren Lauren, Michael and Madeleine, all of Knoxville, TN. Donations may be made to the charity of your choice or to St. Jude's Children"s Hospital in honor of Katie and Madeleine Martin. The family would like to thank the Courtyards Senior Living in Oak Ridge and Amedisys Hospice for their excellent, compassionate care during the time she spent there. Burial will take place at the East Tennessee Veterans Memorial Cemetery in Knoxville,TN at a future date and will be a family affair.

To order memorial trees or send flowers to the family in memory of Lydia Milkovich, please visit our flower store.