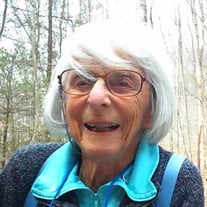 Liane B. Russell, research scientist and environmental activist, died on July 20, 2019, in Oak Ridge, TN. Lee built her career at Oak Ridge National Laboratory, and her scientific research in mammalian genetics is world-renowned. She was also a prominent environmental activist who was instrumental in protecting wild rivers and natural lands in Tennessee. In many of her professional and avocational endeavors, she worked in close partnership with her husband, William L. "Bill" Russell.

Lee Russell, the eldest of three children, was born Liane Brauch, August 27, 1923, in Vienna, Austria. Her mother was a singing teacher, and her father was a chemical engineer whose job included representing British and other countries' chemical industries in Austria. Her parents encouraged Lee's inquiring mind, treated her as a rational being, and convinced her that girls could do anything boys could. As a child she played with toy animals instead of dolls, and as a teenager, she disdained her girlfriends' interest in clothing. During frequent family trips in the Alpine countryside, she developed a love for the natural world, and an urge to defend all living things.

She was fourteen when Nazi Germany invaded Austria. The family had a Jewish heritage, and was fortunate to escape by surrendering their home, all their possessions and Lee's father's business. They made their way to London, where they later survived the Blitz. Her father found employment with one of the companies he had represented, while Lee and her sister Gerda were enrolled in a girls' high school. In 1941 they were again fortunate, when they were able to make it to America. Their ship, avoiding the U-boat-infested North Atlantic, hugged the west coast of Africa, crossed to South America, then sailed up the coast to New York.

By the time she was in her middle-teens, Lee had witnessed fascist takeovers in Italy, Spain and finally in her own Austria. She watched as these states were taken over by totalitarian regimes. This led to a deep appreciation of the United States' constitutional democracy, and a lifelong dedication to being civically informed and actively involved.

Lee's original plan to go to medical school changed radically in 1943 when she became a summer student in the research program at Jackson Laboratory in Bar Harbor, Maine, with Bill Russell as her mentor. This early experience in mouse genetics triggered her eventual decision to pursue a career in genetics research. Bill encouraged her to go to the University of Chicago, and in 1949 she earned a Ph.D there. Lee and Bill were married in New York in September 1947.

The following month they were back in Maine, where tragedy struck in the form of a major forest fire that destroyed half of Mount Desert Island. They joined in battling it, along with many others at Jackson Lab. Unfortunately the fire killed all of the laboratory mice, including the special strains that were about to be shipped to Oak Ridge for the new mammalian genetics program that Bill had been recruited to develop. Lee and Bill had chosen ORNL over other job offers, because it would allow them to work together. The couple moved to Oak Ridge in November 1947, where they had two children, David L. "Ace" Russell, born in 1950, and Evelyn R. Russell, in 1952.

In the exciting early years of Oak Ridge's biology division, Lee made some far-reaching discoveries. Among these are that the Y-chromosome is male-determining in mammals, and that only one of the two X-chromosomes is active in females. Other important research led to the international standards for diagnostic X-rays, the so called "14-day rule", that restricts radiation for women who might not yet know they are pregnant.

Lee was employed by the Biology Division of ORNL from 1947 until her retirement in 2002. She served as Section Head from 1975 to 1995, was designated Distinguished Research Staff Member and Corporate Fellow in 1983, and Senior Corporate Fellow in 1988. During much of her tenure, she was also an Adjunct Professor at the University of Tennessee, where she delivered lectures and served on doctoral committees. She is the author or co-author of 172 papers, some published after her retirement, including her history of 60 years of research at the "Mouse House".

In 1966 Lee's lifelong love of nature flourished into an activism that she continued for the rest of her life. The catalyst was TVA's proposal to dam the Obed, a beautiful wild river in a deep Cumberland gorge. Lee, Bill, and several others, including a group concerned by the threat of a new trans-mountain road through the Smokies, founded Tennessee Citizens for Wilderness Planning (TCWP) a citizen's advocacy group that soon grew to become one of the most effective such organizations in the nation.

TCWP activists helped to lobby Congress to enact the Wild and Scenic Rivers Act, to avert dam threats to other Tennessee rivers, to diminish the ravages of strip mining, and to protect a variety of prime natural areas on public lands. Lee served on the TCWP Board from the group's inception and wrote and edited the TCWP Newsletter, which was and is widely acclaimed for its comprehensive coverage, up-to-date analyses, and practical action suggestions.

Lee was proudest of her work to help in the designations of the Big South Fork National River and Recreation Area in 1974, and of the Obed National Wild & Scenic River in 1976. She also helped in the national effort to regulate strip mining, and in the preservation of the extensive Oak Ridge Greenbelt, in which she and Bill initiated development of an 8-mile foot trail which was subsequently designated a National Recreation Trail.

Both Lee's scientific and conservation work are well-documented in ORNL and TCWP publications, newspaper articles, and elsewhere. Her many awards and honors are listed on her Wikipedia page.

Lee was perceptive, sensitive, self-deprecating and kind. Those who knew her will miss her heroic spirit, lively curiosity, intelligence, optimism, sense of humor, and love of chocolate.

Lee was predeceased by her parents, Arthur and Clara Starer Brauch, her sister, Gerda Rhoads, her brother, Ernest Brauch, her step-son, Dick Russell, and her husband of 56 years, Bill Russell. She is survived by her son, David "Ace" Russell (Knoxville, TN), her daughter, Evelyn Russell (Minneapolis, MN), her stepchildren, Jack Russell, Jim Russell and Ellen Gilmore (all of Mount Desert Island, Maine) and their children, Dick's children and grandchildren, her English niece Margaret Woods, and nephew, Robin Russell, and their children and grandchildren, and by nine nieces and nephews, the children of her brother, Ernest.

The family asks that donations in honor of Lee Russell be made to Tennessee Citizens for Wilderness Planning. There will be a memorial service October 19, 2019 at 2 PM at the Pollard Center in Oak Ridge, TN

To order memorial trees or send flowers to the family in memory of Liane Russell, please visit our flower store.