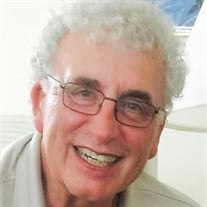 Lawrence Frank DeRoos was born in Harvey, IL on September 15, 1945 to Frank and Dorothy DeRoos. He attended Thornridge High School and later graduated with honors from the University of Illinois as a Metallurgical Engineer in 1967.


Larry married Patricia Smith of Tinley Park, IL on October 14, 1967. They enjoyed the last 50 years of marriage, as she was the love of his life. Through their love was born Kent (Lori) DeRoos of Knoxville, TN and Kimberly (Mark) Uyak of Mount Pleasant, SC and his much loved granddaughters Tinley (13), Taryn (10) and Torrey (7) Uyak.

Larry and Pat moved to Claxton, TN upon their marriage and Larry worked as an engineer at Y-12 in Oak Ridge for 31 years before retiring in 1998. In retirement, as an engineer and outdoorsman, Larry took his hobby to a new level. He actively pursued the perfection of gunsmithing as well as hunting and fishing. He also loved spending time with his granddaughters and his mother.

Larry is also survived by his mother, Dorothy, of Marco Island, FL, brother, Alan (Sue) DeRoos, of Macomb, IL, and niece, Alissa, of Chicago, IL. He was preceded in death by his father in July 2014.

One of the best gifts Larry leaves us with is the reminder that it is the quality of life more than the number of years that makes a life well-lived.

Visitation will be Tuesday, June 13, at the Martin Oak Ridge Funeral Home, 1017 Turnpike, from 5:00 to 7:00 pm. Cremation services have been accorded with no further services. In lieu of flowers, please consider donations in honor of Larry DeRoos to Tennessee Wildlife Resources Foundation at http://www.twrf.net/donate/ .

To order memorial trees or send flowers to the family in memory of Lawrence Deroos, please visit our flower store.