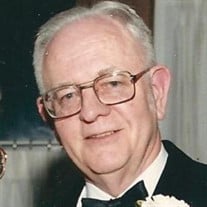 Lamar Chappell (Chap) Toomer passed away on March 17, 2020 in Oak Ridge, Tennessee. He was born on September 28, 1923 in Portsmouth, Virginia, to James Hodges Toomer II and Katherene Kennedy Toomer.
He was preceded in death by his parents, his first wife, Frances McNeer Toomer, second wife, Emily Eatherly Toomer, daughter, Rebecca Kester, and brothers, James H. Toomer III, and Livingston K. Toomer. He is survived by his daughter, Marti Turner, her husband, Nelson, son-in-law, Marcus Kester, and grandchildren, Captain Cody Kester and Ashley Kester. He is also survived by Emily's sons, Scott and Richard Eatherly, as well as their wives, Janie and Diana, and children.
Chap grew up in Portsmouth near the Chesapeake Bay, where he developed a love of sailing and boats. He graduated with a B.S. in Mechanical Engineering from Virginia Tech in December 1943. He immediately joined the US Merchant Marine, serving from 1944-1947 on ships providing supplies for WWII and to restock Europe and Africa.
Chap came to Oak Ridge in the early 1950's and worked in various roles with the Oak Ridge DOE Operations, primarily at K-25. He was a member of St. Stephen's Episcopal Church for more than sixty years, serving on the vestry, and in numerous volunteer roles. Chap also served on the boards of the Oak Ridge Civic Ballet, The Oak Ridge Arts Council, and the Tennessee Arts Commission, in addition to volunteering with other community groups. He will be especially remembered for his ballet photographs, and his work to acquire the sculpture in the Oak Ridge Civic Center Plaza.
After arriving in Oak Ridge, Chap met and married Frances. Following Frances' death, he was fortunate to marry Emily in 2001. In his later years, he enjoyed golfing and traveling with Emily.
A private interment will be held at Oak Ridge Memorial Gardens on Monday, March 23, 2020. A memorial service will be held at a later date at St. Stephens Episcopal Church.
In lieu of flowers, the family asks that donations be made to ST.Stephen's Episcopal Church, 212 N Tulane Ave, Oak Ridge TN 37830 or The Arts Council of Oak Ridge, PO Box 4324, Oak Ridge TN 37830. Online messages may be left for the family at www.martinfuneralhomeoakridge.com . Services entrusted to Martin Oak Ridge Funeral Home 865483-4341

To order memorial trees or send flowers to the family in memory of Lamar Toomer, please visit our flower store.