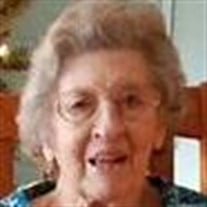 Kathryn Lovegrove, age 92 passed away Sunday, April 9, 2017 at NHC, Oak Ridge..
Kathryn was born November 5, 1924 in Fish Springs, Tn to William Henry and Bessie Folsom Markland.
Kathryn made Oak Ridge home in 1954 and became a member at Central Baptist Church where she and
Jack raised their family. She was very active in the adult and JJ choir for many years.

Upon retirement in 1987 they began traveling with their travel trailer. They visited 49 of the 50 states
with Alaska being where they spent their 50th anniversary. She would not fly so she did not visit Hawaii.
She was always involved with singing and crafts wherever they visited.

The funeral will be held Wednesday at Central Baptist Church with the Rev. Glenn Ellis, with interment
to follow at Oak Ridge Memorial Park. Receiving of friends will be from 12:30 to 2:30 with the service to
follow at the church.

Memorials may be made to the Alzheimer Association.

To order memorial trees or send flowers to the family in memory of Kathryn Lovegrove, please visit our flower store.