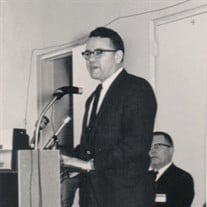 Julian, always known to his friends as "Buddy", was a Navy veteran of WWII, having served aboard the aircraft carrier John Hancock in the Pacific Theatre. After returning to civilian life, he began a long career as teacher, coach and consultant.

Early on, he taught physical education, and was a notably successful coach of Track and Cross Country at Wakefield High School in Arlington, VA. At Wakefield, also, he married fellow teacher Carolyn Mahoney, beginning a loving partnership which would endur until his death.

In the second phase of his career, he became known internationally for his contributions in the area of physical fitness for people with mental and physical disabilities. He was devoted to that work, and for many years, the demand for his services took him around the world, speaking, writing, consulting and conducting workshops for professionals in the field.

Finally, even Buddy had to retire, though he continued to stay in touch with colleagues, former students, and men from those long-ago Track and Cross Country squads.

In retirement, he and Carolyn lived in Anderson County, TN, first in their "Home-on-the-Hill", which faced out to the mountains, then later at Greenfield (now Commonwealth) Senior Living, in Oak Ridge, where he died.

Buddy is survived by his wife of 64 years, Carolyn Mahoney Stein, and by their three sons and their families: Mark Stein and his husband, Timothy Learmont, of Ashland, OR; James Stein, his wife Joan Gucwa Stein, and their sons David and Joseph of Shelton, CT and Boston, MA; and Jay Stein, his wife Janet Parker Stein, and his daughters, Anna and Julia, of Vienna, VA; and by beloved family members and friends.

He was a longtime member of the Jewish Congregation of Oak Ridge, and will be interred in that cemetery following a graveside service.
In lieu of flowers, a contribution may be made to a charity of choice.

To order memorial trees or send flowers to the family in memory of Julian Stein, please visit our flower store.