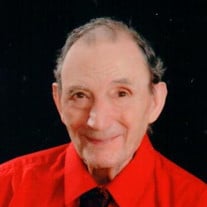 John James "Jim" Henry, age 90, of Oak Ridge, passed peacefully at his home surrounded by family on March 22, 2019 due to complications from Parkinson's Disease.
Jim was born in White Pine, TN, one of 6 children of Clara Spurgeon and Herbert Holloway Henry. He grew up in Winter Park, FL and graduated from Winter Park High School. He began his college education at the University of Florida in 1946 in fine arts. Midway through his college career he enlisted in the Marine Corps from 1949 to 1952. He served as a Radar Technician and attained the rank of Sergeant. He returned to Lincoln Memorial University, where he majored in Physics and Mathematics and minored in Chemistry and Music, receiving a Bachelor of Science Degree in 1954. It was at LMU that Jim met his wife, the former Audrey Duffield, to whom he was married for 64 years.

Throughout his career he was involved with a broad range of activities. He began his professional career as an instrument technician with Carbide & Carbon Chemical Company at Y-12 in Oak Ridge in 1954. He was promoted to Associate Physicist in 1956 and to Physicist in the nuclear division of Union Carbide Corporation in 1961. He continued his work as a Development Physicist and contributed to many projects until his retirement in 1992. He worked on the AVLIS (Atomic Vapor Laser Isotope Separation) project at K-25 in the mid-1980s, before returning to Y-12 where he retired. He holds 13 patents in electronic instrumentation, nuclear engineering, and space science; among them are a refrigerator which carried blood samples into space to study chromosome damage during Gemini 11, and a gear unit that allowed the mirrors on the Hubble Telescope to be adjusted.
Jim had many diverse interests and hobbies and always loved learning new things. He taught transistor circuit theory in the adult education program in Oak Ridge, was active in the American Association for the Advancement of Science, the Institute of Electronic Engineers, and the Instrument Society of America. He received an IR 100 Award in 1979. He was president of the Atomic City Stamp Club. He played tympani in the Oak Ridge Symphony Orchestra, where he served as publicity chairman from 1966-1967 and vice president from 1968-1969. He participated in amateur theatricals in the Oak Ridge Playhouse. He bowled in two leagues and won several trophies. He was involved heavily in St. Stephen's Episcopal Church where he was a boy scout leader, taught Sunday School, served on the Vestry, was a chalice bearer, served on the Outreach Committee helping to provide food and services to people in need, and sang tenor in the choir for 58 years. He loved working crosswords, watching football, and spending time with his family and his cats. He was always there for those who needed him and was a loving husband, father, and grandfather.
.

To order memorial trees or send flowers to the family in memory of John Henry, please visit our flower store.