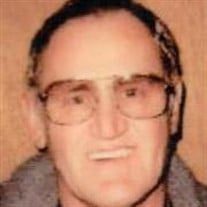 Jerry R. Leach age 86 is in the care of Martin Oak Ridge Funeral Home. Jerry passed away February 7, 2019. He was born October 26, 1932 in Morley, Tennessee to Joseph Leach and Lily Davis Leach. Also known as "jaybird" when he was behind the wheel of his truck. He drove the "big rigs" for many years and loved to drive and see the country. Jerry fought in the Korean War from 1951 to 1953 and earned the purple heart. Even though he loved to watch the TV show MASH, he said that "war is a terrible thing that no one should have to do". Jerry loved gospel music and the Gaither family was on of his favorite gospel groups and loved to watch Bluegrass Underground. He loved and was always telling stories, and never met a stranger and once you met him there was a special bond with him. He was preceded in death by his Parents: Joe and Lily (Davis) Leach, Daughter: Dreama Diane, Brothers: James Leach, Harold Leach, Bobby Leach and Alfred Leach, Sisters: Sue Campbell and Wilma Woody, Stepdaughter Joyce Ann Nowak, Stepson: Harold Lizby, and his long-time companion: Phyllis Bryant. Jerry is survived by brothers: Richard (Linda) Leach, Billie (Gabby) Leach, sisters: Doris (Cecil) Davis, Mildred Taylor, daughters: Tammy Cagle and Marsha Garrison, Son: Darrell Leach, Stepdaughter: Sandra Alcaraz, Stepsons: Woody Smith, Allen Smith, Danny Smith and Robert Smith. Also 5 grandchildren and 8 Great-grandchildren, Eighteen Step Grandchildren and 18 Step Great Grandchildren. Visitation with the family will be 11am until 12 noon Tuesday February 12, 2019 at Martin Oak Ridge Funeral Home with a funeral service at noon. Interment and grave side service will follow at 2:00 pm at East Tennessee Veterans Cemetery. Online messages may be left for the family at www.martinfuneralhomeoakridge.com . Services entrusted to martin Oak Ridge Funeral Home, 865-483-4341

To order memorial trees or send flowers to the family in memory of Jerry Leach, please visit our flower store.