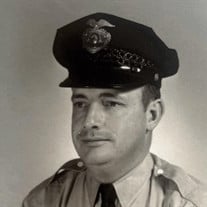 James "Jim" Leonard Monger, age 86, passed away peacefully on July 12th, 2021 at UT Medical Center in Knoxville, Tennessee surrounded by family. He was born on December 29th, 1934 in Lenoir City, Tennessee to Carl and Fleta Duggan Monger. Mr. Monger graduated from Lenoir City High School in 1953 and went on to study at Middle Tennessee State University for two years. He was employed with the Lenoir City Police Department from 1958 until 1960 and then served with the Oak Ridge Police Department from 1960 until 1990. While serving with the Oak Ridge Police Department, he was granted the opportunity to attend the FBI Academy in Quantico, Virginia and graduated from the program in 1969. He did this all while serving in the in the United States National Guard from 1952 to 1992, and serving in the United States Marine Corps from 1958 to 1960. Mr. Monger also acted as a bailiff and civil processor from 1993 to 2015 with the Anderson County Sheriff's Department.
Throughout his life and career, Jim held many titles but his most favorite of all was the title of "Papaw". Jim had a multitude of hobbies and interests, but his most beloved activities of all were spending time with his family and attending the athletic and extracurricular events of his children and his grandchildren. Not only was Mr. Monger and avid knife collector with a love of rare and specialty collector's knives, but an active member of the Oak Ridge community. Jim was a Board member of the Oak Ridge Sports Hall of Fame, and one of the Directors for the Boys and Girls Club of Oak Ridge. Jim was also a 32nd Degree Scottish Rite Mason and a member of Crystal Masonic Lodge #616 in Briceville, Tennessee.
Jim is preceded in death by his parents Carl and Fleta Duggan Monger and his sister, Elva Louise Johnson. He is survived by his loving wife of 61 years, Carolyn K. Puckett Monger, as well as his daughter Kimberly Monger Bergeron, husband Ray; son James "Jimmy" Walter Monger, wife Sheri; son Scott Anthony Monger, wife Leigh; and daughter Jennifer Leigh Monger. Grandchildren, Danielle Bergeron Cooper, husband Josh; Steven Avery Monger, wife Kelsey; Merritt Leigh-Aynn Monger; Ava Madison Monger; Ragan Christine Monger. Great- Grandchildren, Croix James Ronald Cooper; Sutton Ridge Monger. Dear friends include all the Oak Ridge Football Bankers, Mr. Lawrence Hahn, and his brother-in-law James "Jimmy" Puckett.
A Celebration of Life will be Friday July 23rd, 2021 at 6:00PM at the Oak Ridge Boys and Girls Club with full military and police honors with Reverend Steve McDonald officiating. Expressions of love may be made in lieu of flowers as donations in Jim's name to the Oak Ridge Boys and Girls Club.

To order memorial trees or send flowers to the family in memory of James Monger, please visit our flower store.