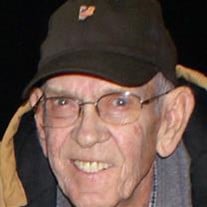 It is with great sadness that the family of James C. "Jim" Jordan, Jr., announce his passing on Wednesday, October 26, 2016 at Methodist Medical Center in Oak Ridge, surrounded by family.
Jim was born in Joliet, Illinois on June 22, 1935. He was a proud veteran of the United States Air Force, which he joined at the age of 17. He loved to talk about his Air Force career taking him all the way from Goose Bay, Labrador to Morocco and finishing at McGhee Tyson in Knoxville. After the Air Force, he moved to Oak Ridge, where he worked as a nuclear technician at the Molten-Salt Reactor at X-10.
As a very active member and past President of the Jaycees in Oak Ridge, Jim took part in many civic programs. One of those civic programs he was most proud of, was being instrumental in the foundation of the Area 5 Special Olympics in Oak Ridge in 1972. That organization has now grown into the Special Olympics of Greater Knoxville, which includes Knox County, Anderson County, and Oak Ridge.
Jim, along with his former wife Pat Jordan, owned the Cheese Crock in downtown Oak Ridge, that was for years a favorite restaurant to many Oak Ridgers. He loved supporting the ORHS athletes, and often provided pregame meals for them.
In his retirement, Jim enjoyed doing handyman work all over town and could fix most anything, many times not accepting pay for his work. He cherished his friendships over the years, and his kids and grandchildren were the light of his life.
Jim is survived by his daughter Jackie Jordan Pullen and her husband Bob of Oak Ridge; son Jim Jordan of Oak Ridge, son Ian Jordan and his girlfriend Ashley Lowe of Oak Ridge, son Spencer Jordan and his wife Carolyn of Frankfort, Ky. and grandchildren Lane and Alexis Gonzalez.
The family wants to thank his wonderful caregivers for the last several months, who greatly enhanced his quality of life in his own home. Those rides all over the countryside made him so very happy. Jim also loved his longtime companion and pet, General, who was by his side for more than 16 years before General's passing earlier this year.
It was Jim's wish that no services be conducted on his behalf. The family will host a gathering for friends and family to honor Jim's life and friendships at a later date.
The family asks that in lieu of flowers a special donation in Jim's name be made to: ORHS CDC Program, Attn: The Special Olympic Athletes, 1450 Oak Ridge Turnpike, Oak Ridge, TN 37830.

To order memorial trees or send flowers to the family in memory of James Jordan Jr., please visit our flower store.