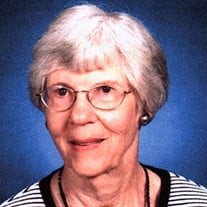 Helen Howes McKown of Oak Ridge, Tennessee died peacefully in her sleep at age 94 on December 15, 2017. She was born July 29, 1923 in St. Paul, Minnesota to Frank Twombly and Minnie D. Howes.

After receiving her B.S. in education at the University of Minnesota, Helen was interviewed by Superintendent Blankenship of Oak Ridge Schools saying that he liked teachers he had previously hired from Minnesota. She was hired in the summer of 1945 to teach at Elm Grove Elementary School. She did not arrive in Oak Ridge until late August.

When her friends and family heard that the atomic bomb was made in Oak Ridge, Helen said she still wanted to teach there. She took to train down to the L&N station in Knoxville and transferred to a bus that dropped her off at the bottom of the hill at Kentucky Avenue and was told to hike up the hill to the high school carrying her suitcases for her assignment of where to live. She looked at those muddy sidewalks and almost turned around to catch the next bus back to Knoxville.

But if she had not stayed, she would have not met her future husband, Henry (Hank) McKown square dancing in Glenwood Elementary School's gym in 1946. They were wed on July 16, 1947 at Unity Church in St. Paul, Minnesota. It was a loving, wonderful marriage that lasted 68 years, ending when Hank died in 2015, also at 94 years old.

Together they raised four daughters who went to Glenwood Elementary School because they lived on East Drive in the third privately built house in Oak Ridge. When the girls were young, Helen enjoyed leading their Girl Scout and Campfire Girls troops. She was also active in the PTA in those childhood years.

Helen and Hank were charter members of the Oak Ridge Unitarian Universalist Church formed in 1950. She served on their board and was also secretary of the church in the 1970s. She served on many committees, taught Sunday school, and was pleased to have been able to sing in the church for 60 years. She also initiated the writing of the church's 65 year history.

Helen's love of music led to her singing with the Oak Ridge Chorus and actively participated in the Oak Ridge Civic Music Association and in their Guild.

She made many of her own and her daughters' clothes and enjoyed meeting monthly with a group of friends in their sewing circle. Later her love of embroidery led her to joining the Embroiderers Guild where she greatly expanded her knowledge of stitchery making beautiful pillows, wall hangings and well over 100 name tags for the members of her church. She also loved to knit sweaters. She only stopped when her eyesight dimmed from macular degeneration, but she kept up the relationships with her friends in those groups until she died.

Helen and Hank loved to travel and saw most of the US and a good many countries in Europe and the Middle East when Hank was transferred to work in Vienna with the International Atomic Energy Agency for three years in the late 1970s. They continued their travels later in life to Central America, Peru, Australia, New Zealand and China.

When the World's Fair came to Knoxville, Helen started volunteering by greeting people at the American Museum of Science and Energy. After the fair ended, she continued volunteering at the information desk every Friday morning for over 25 years. She enjoyed telling visitors about Oak Ridge's history and meeting people from all over the world.

Surviving her are four daughters: Louise McKown of Oak Ridge; Betsy Perkins and husband Dexter of Grand Forks, North Dakota; Anne Child and husband Garry of Dripping Springs, Texas; and Jean Norton and her husband Ron of Solebury, Pennsylvania. Grandchildren are George Perkins of Los Alamos, New Mexico; Doug Perkins of Toyko, Japan; and Eric and Lindsey Norton who are still in college in Philadelphia and California. She had one great-granddaughter, Cora Perkins. Two sisters-in-law, Carrie Howes and Mary Cunningham are both 90. Helen has three surviving nieces and two nephews and their children. Helen is preceded in death by her parents; her twin brother, George and her husband, Henry McKown.

A memorial service to celebrate her long life will be held at the Oak Ridge Unitarian Universalist Church. 809 Oak Ridge Turnpike on January 6, 2018 at 2:00 pm. Rev. Tandy Scheffler will be officiating. In lieu of flowers, memorials may be made the Endowment Funds of the Oak Ridge Unitarian Universalist Church. Special thanks from the family go to Betsy and Martin Bauer and Marty Adler-Jasny who helped the Hank and Helen in countless ways over the past five years. Martin Funeral Home is in charge of the arrangements

To order memorial trees or send flowers to the family in memory of Helen McKown, please visit our flower store.