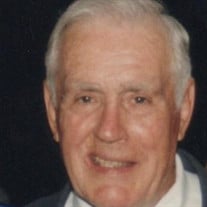 Harold E Wolfe was born in Knoxville, Tennessee on June 24th, 1923 to the late William Columbus Wolfe and Eddie Pryor Wolfe. Harold attended Cumberland High School in Crossville, TN. In January of 1943, at the age of 19, he entered the Army. He served overseas during World War II for 28 months in the 876th Airborne Engineer Unit. He was in four campaigns throughout Normandy, North France, the Rhineland and Central Europe. After the War he returned to Tennessee where he worked for the TVA for 36 years as a Senior Hydro Electric Operator.
Harold had a love of mountains and nature. Gardening was a form of therapy for him.
Harold and his wife Gwen had a love for traveling where they made many memories with family and friends.
Preceded in death are his wife Gwendolyn Angel Wolfe of Oak Ridge, TN and brothers Gordon Pryor Wolfe, William Columbus Wolfe Jr, and sister Laura Catherine Landers. Living children are Harold E Wolfe Jr. "Buddy" and wife Sharon of Knoxville, Ann and husband Mike DeLozier of Maryville, and Charlene and husband Tom Ellison of Columbus,Ga. Grandchildren are Caleb and Chloe Wolfe, Andy and Melissa Delozier, John, Matt and Laura Ellison. Great-grandchildren include Catherine, David, Wesley, Tommy, Elizabeth, and Benedict Ellison.
Harold was a life-long member of these organizations: the Masons, the Shriners, the Scottish Rite, the Eastern Star, and the International Brotherhood of Electrical Workers.
In lieu of flowers, donations may be given to the First United Methodist Church of 1350 Oak Ridge Turnpike, Oak Ridge, TN 37830, or to the Organization for Autism Research at 2111 Wilson Boulevard, Suite 401, Arlington, VA 22201 in honor of Lindie Jean Martin, a child that brought Harold much joy. The family will have a private graveside service at East Tennessee Veterans Cemetery. Online messages may be left for the family at www.martinfuneralhomeoakridge.com . Services entrusted to Martin Oak Ridge Funeral Home. 865-483-4341

To order memorial trees or send flowers to the family in memory of Harold Wolfe, please visit our flower store.