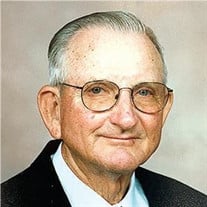 Harold Glenn Speer, age 91,
passed away on September 20th
at NHC in Oak Ridge. He was
a member of Laurel Church of
Christ. Preceded in death by his
parents, Dr. Harold and Elizabeth
Speer, and by his brother, Dr.
Keith Speer. Survived by his
wife of 68 years, Ruby; daugh-
ters, Becky Makla (John), Dr.
Patti Speer, and Jane Flaspohler
(John); sons, Dr. Harold G. Speer,
Jr. (Grace) and Keith Speer; 12
grandchildren, three great-grandchildren; and sister, Lois Baird of Signal Mountain, TN. He was born in Kentucky but reared in Grundy, Virginia. He graduated from high school in 1943 and entered World War II as a gunner on a B-24. After the war he went to Centre College in Kentucky graduating in 1949. He taught school for a year then re-enlisted in the Air Force during the Korean War. He flew F-86 and F-100 jets until he left the Air Force in 1962. He then sold cars in Knoxville for 40 years. Visitation will be at 6:00 p.m. at Laurel Church of Christ on Monday, September 25. A Memorial service will be at 7:00 p.m.
In lieu of flowers, make donation to Laurel Church of Christ, PO Box 10248, 3457 Kingston Pike, Tennessee 37919.

To order memorial trees or send flowers to the family in memory of Harold Speer, please visit our flower store.