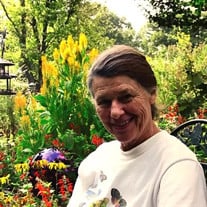 Gloria Joanne Krewson, known as Joanne to most, died in the early morning hours of Friday, April 21, 2017 while in comfort care. She had been hospitalized the previous Monday morning after suffering a stroke related to heart issues.

Joanne was a resident of Oak Ridge, Tennessee, having previously lived in several places in the Knoxville and Roane county areas after moving to Tennessee from Arkansas.

Joanne's passions and interests were vast, but she will be remembered by many for her pottery making and gardening. She combined her love for flowers and all beauty from nature with her ceramic art, creating tiles that included native plants combined with colorful glazes bonded to the clay in hot kilns or fire pits.

Joanne was a successful ceramic artist, creating a dizzying array of art throughout her lifetime, from the smallest bead to larger tiles that made their way into tables and kitchen counters. Her creations have graced many art galleries, and she was involved with art centers including the Community Arts and Craft Center and Arrowmont School of Arts and Crafts, among others.

Throughout the years, she spent much time at the Oak Ridge Unitarian Universalist Church, giving time and talent, teaching children how to make pottery and working tirelessly to maintain the church gardens. She was also an active helper with the Stone Soup program, providing community meals to those in need.


A loving mother, she never was without a sparkle in her eye when it came to her sons. Joanne and Charles Kuykendall lived in Knoxville, Tennessee, raising sons David and Joe. Years later she gave birth to her youngest, John, with husband Jack. While Joanne was not known for organizing social events, she was instrumental in helping the different family groups stay in touch with one another, including the family of her deceased brother Bill and his wife Louise.

Her love for flowers was passed down from her mother Millie, and her aunts and other relatives in Arkansas. Her mother, married to Henry Mixon, ran a greenhouse residing on the same property as their home, one greenhouse of at least two in her immediate Arkansas family.

She is survived by her beloved husband, John "Jack" Krewson and children and spouses, David Charles Kuykendall and wife Lisa, Joe Henry Kuykendall and wife Paula, John Krewson and wife Nicole, sister Kathy Manatt and her sons Steven and Taylor in Arkansas. Grandchildren and spouses include Daniel Kuykendall and wife Donna and their children Dustin and Amanda, Louis Kuykendall and wife Ashley and their children Benjamin and Hailey. Her stepsons and spouses John Krewson and wife Cindy, Eric Krewson, Joe Krewson, and Tom Krewson live in Georgia, Alabama, and Tennessee, respectively. Stepchildren include granddaughters Hali, Kira, and stepgrandson Jim, father of daughter Teagan. Another great granddaughter, Olivia, resides in Athens, Tennessee. Joanne is also survived by her former spouse Charles Kuykendall and wife Sandy and sister in law Louise Mixon, mother of Ric and Michael Mixon. Too many to list are her relatives around the country, including Hot Springs, Arkansas, Knoxville, Tennessee, and Oak Ridge, Tennessee, and other states and cities. She also leaves behind her devoted feline companion, Bogie, and the strays that found their way to her and her garden.

Mrs. Krewson was preceded in death by her parents William Henry Mixon and Mildred Shults Mixon in Hot Springs, Arkansas, and her brother, William. R. Mixon.

A celebration of life will be held at Oak Ridge Unitarian Universalist Church Wednesday, April 26, at 6 p.m., with a reception to follow.

To order memorial trees or send flowers to the family in memory of Gloria Krewson, please visit our flower store.