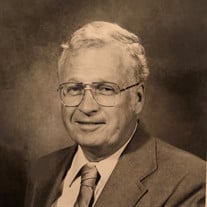 George Waymon Brandon, Jr, 81, of Oliver Springs, passed peacefully on December 25, 2019 in his home surrounded by his family and caregiver David Phillips. George was born on February 4, 1938 in Murfreesboro, TN. He was a member of First United Methodist Church in Oak Ridge, TN, where he previously served as a Sunday School teacher. He received a B.S. in Physics from Tennessee Tech University in 1959. In George's early career (1959-1973,) he was an aerospace physicist/engineer at NASA and contributed to the Mercury, Gemini and Apollo space missions, including development of heat shielding. George first found his love for airplanes during his teenage years when he worked at Nashville Regional Airport. George later retired from Y-12 in 1996 after working as an engineer/manager in several departments and after being actively involved in the career planning program. George enjoyed spending time with his family, sailing ,woodwork, including making dulcimers, refinishing antiques and building boats. He also enjoyed hiking, making several trips to Mount LeConte. George served as Treasurer for Tennessee Llama Community for a number of years. He also served as an instructor for the US Power Squadron. George spent much of his time working on his farm where he and his wife ran a llama rescue, Indian Creek Llama Sanctuary. George is preceded in death by his parents, George W. Brandon, Sr. and Carol Cox Brandon. He is survived by his wife of 59 years, Patricia Suddarth Brandon and his daughter Beth Nickle and husband Lee of Oak Ridge, sons Jim Brandon and his wife Suzanne of Maryland, and Mike Brandon and his wife Jane of Knoxville. He is also survived by his granddaughter Sarah Robinson and her husband TJ of Oak Ridge, grandsons Brandon Nickle of Oak Ridge, and Jacob and Caleb Brandon of Maryland. Additionally he is survived by his brother John Brandon and his wife Evelyn of Franklin, TN as well as nephews Jason Brandon of South Carolina and Jeremy Brandon of Franklin, TN, and niece Julia Perfilio of Springhill,TN and several great nieces and nephews. In lieu of flowers, the family requests that donations be made to Southeast Llama Rescue, 678 Mill Creek Rd, Luray, VA 22835. A receiving of friends will be held at First United Methodist Church in Oak Ridge on January 4, 2020 from 11:00-1:00. A private family ceremony will be held at a later date.

To order memorial trees or send flowers to the family in memory of George Brandon, please visit our flower store.