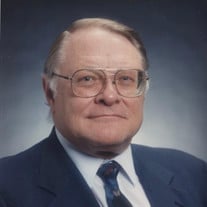 Paul will be remembered for his passion for rocks, soils and plants, his excitement about ideas, and his ability to encourage and inspire. He was fascinated by maps, cameras, old and new technologies, geography, history and travel. Paul was a dedicated scientist with a deep and broad expertise that spanned the spectrum from practical farming techniques to computer analysis of environmental data. He treasured growing up on the fertile South Dakota plains and living in the wooded hills of his adopted home in East Tennessee.

Paul was born July 17, 1933 in Redfield, SD to Cora (Keller) and Frank Baxter. He was the youngest of six children. His family farmed near Rockham, SD and Paul developed a keen interest in agronomy. He graduated from Redfield High School in 1951 and received his bachelor's and master's degrees in soil science from South Dakota State University. One of Paul's greatest adventures was taking his family to Kabul, Afghanistan, where he taught geology and soils at Kabul University from 1958-1962. In 1966, Paul became a professor of natural resources at the University of Wisconsin¬¬ - Stevens Point. He found his career's focus on ecology in his doctoral work at University of Wisconsin - Madison, where he received his Ph.D. in 1969. Paul was an ecologist when ecology was still in its infancy-his research in soils and related ecosystems helped develop this new interdisciplinary field.

In 1971 he joined Oak Ridge National Laboratory (ORNL) as one of its first ecologists. In 1973 he moved to the Tennessee Valley Authority (TVA) and led a project that developed an early computer system to analyze geospatial data. During the 1980s and 1990s Paul managed many projects with ORNL, TVA and EPA, focusing on creating computer systems for land use planning and toxic waste disposal, and developing new geographic information systems (GIS) applications. In 1997 Paul joined the Ag-Chem Company in Jackson, Minn. He pioneered the use of GIS technology for site-specific agriculture and established an international training center.

He returned to Knoxville a few years later and found great joy in returning to college teaching. Paul saw the need for increased training in GIS and started new programs at both Roane State Community College and Pellissippi State Community College. Paul served on the Norris Planning Commission and the Anderson County Parks Commission. He was active in Rescue Our Community, a group opposed to commercial/industrial rezoning in the Norris area, and a member of the Tennessee Viticultural and Oenological Society (TVOS).

Throughout his life, Paul was well-loved. He married his high school sweetheart, Marion Schultz, in 1954 and they spent 41 happy years together in South Dakota, Afghanistan, Wisconsin and Tennessee. When Paul started his teaching career at University of Wisconsin - Stevens Point in 1966, they bought a 250-acre farm and gave their children the invaluable experience of farm life. Paul's next job took them to East Tennessee. They settled first in Oak Ridge and later in Norris, founding a blueberry and vineyard business called Greenbriar Farm in 1979.

After Paul was widowed, he married Glenda Ross in 1997 and they enjoyed 20 wonderful years together in Knoxville. Paul and Glenda owned Greenbriar Nursery for Edible Landscaping. Their nursery was dedicated to sharing Paul's commitment to stewardship of God's creation by working in farmers' markets in three counties, conducting workshops for hundreds of people, and teaching them how to grow blueberries and other edible plants for beauty and food throughout their yards.

Paul is survived by his wife, Glenda Ross of Knoxville, Tenn. and sister, Mary Hines, of Wessington Springs, SD. He was preceded in death by his first wife, Marion, and his siblings Merle Baxter, Carroll Baxter, Sheldon Baxter and Ruth Hargens.

The family would like to thank all of Paul's special caregivers during his last 18 months of illness. We are especially grateful to Dr. Chase Wilson, Homewatch caregivers Mark McCullough and Felicity Starr, UT HomeCare Services nurse Meghan Hurley, physical therapist Tammy Morton, and many other awesome doctors, nurses, CNAs and therapists whose loving care and friendship we so appreciated during Paul's last months in hospitals and therapy centers.

In lieu of flowers, the family would greatly appreciate remembrances to one of the following organizations:

• The University of Tennessee Gardens, where a Paul Baxter Memorial Blueberry Garden will be developed in his honor by daughter-in-law Holly Jones.

In lieu of flowers, please remember Paul by giving to either the University of Tennessee Gardens or the South Dakota Nature Conservancy.

University of Tennessee Gardens
A blueberry plantings area is being planned in memory of Paul.

Online:
https://www.nature.org/ourinitiatives/regions/northamerica/unitedstates/southdakota/giving/index.htm
Although there is not a place on this website to specify your donation for an individual memorial, we appreciate your gift.


Paul's Afghanistan Photographs
Paul's daughter, Barbara Baxter Jenkins, is currently digitizing hundreds of Paul's Afghanistan photographs for a permanent research and online collection at the University of Wyoming, the institution that hired Paul to teach in Kabul, Afghanistan. These photographs document Paul's work and Afghanistan's people and geography from 1958 - 1962.

Paul's photographs will be made available later at the University of Wyoming American Heritage Center ( http://www.uwyo.edu/ahc/ )

Until they are available through the University of Wyoming, you can view a selection of Paul's photographs on Barbara's web site: https://www.flickr.com/gp/barbprojects/2RWLS0

To order memorial trees or send flowers to the family in memory of Franklin Baxter, please visit our flower store.