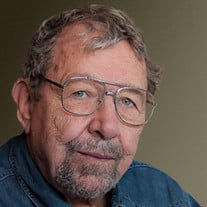 E. Charles ("Charlie") Crume, Jr., died peacefully on October 18, 2021. Charlie was born in Dayton, Ohio, on November 14, 1931, the son of Enyeart Charles ("Jack") Crume, Sr., and Evangeline Lee Snyder Crume. He attended Dayton public schools and graduated from Stivers High School (now Stivers School for the Arts) in 1949. After earning an A.B. in physics from Wabash College in Crawfordsville, Indiana, and an M.A., also in physics, from Wesleyan University in Middletown, Connecticut, he joined Pratt & Whitney Aircraft and worked at the Connecticut Advanced Nuclear Engineering Laboratory (CANEL), where he rose to the position of operations supervisor of the CANEL critical experiment facility.

Charlie moved to Oak Ridge, Tennessee, in November 1964 to work at the Y-12 Plant as a nuclear criticality safety specialist. He took advantage of Union Carbide's educational assistance program to earn a Ph.D. in physics from the University of Tennessee in 1972. He then transferred to the Thermonuclear Division of Oak Ridge National Laboratory (ORNL) and spent the next two decades conducting theoretical and experimental research in fusion energy. His 1989 paper with his colleague Kerchung Shaing, "Bifurcation Theory of Poloidal Rotation in Tokamaks: A Model for L-H Transition," has been cited more than 985 times. When national funding for fusion research was reduced, Charlie returned to nuclear criticality safety, serving as head of ORNL's program in this area until retiring in 1994 and continuing to work as a consultant for several years thereafter.

For many years, Charlie was active both on and off stage at the Oak Ridge Playhouse. He made his mainstage debut in "Once Upon a Mattress" in 1973 and enjoyed large and small roles in many plays. Among his favorites were "Morning's at Seven" (Homer Bolton), "Wait Until Dark" (Harry Roat), "The Front Page" (Hildy Johnson), "Arsenic and Old Lace" (Jonathan Brewster), and "Richard II" (Henry Bolingbroke). He also served as lighting director for a number of shows, taking special pride in the lighting for "Foxfire" and "To Gillian on Her 37th Birthday." He was a member of the Playhouse board in the 1980s and was recognized with a Lifetime Achievement Award in 1995.

Charlie realized his lifelong dream of learning to fly in the late 1970s. He held a commercial pilot certificate and was a Certified Flight Instructor Instrument (CFII). For nearly 20 years, he was the proud owner of N2606X, a Cessna P206 Super Skylane, which he flew to Alaska and many other destinations. His pilot's logbook documents landings as pilot in command in 49 states.

Charlie was a member of the American Nuclear Society and the American Physical Society and an ardent supporter of science education. He served for 3 years in the U.S. Army Reserve, rising to the rank of sergeant first class.

The family extends its warmest thanks to Amedisys Hospice, Canterfield of Oak Ridge, and the Rev. Bailey Norman for the care provided to Charlie in his final days.

Charlie's funeral service will be held at St. Stephen's Episcopal Church in Oak Ridge at 4 p.m. on November 6, followed by interment of ashes in the church's memorial garden. (Masks are required inside the church building.) In lieu of flowers, friends are asked to consider donating to the Oak Ridge Playhouse, PO Box 5705, Oak Ridge, TN 37831; the Stivers Seedling Foundation, PO Box 1858, Dayton, OH 45401; the Society of Physics Students, 1 Physics Ellipse, College Park, MD 20740; the Alzheimer's Association or the Alzheimer's Foundation of America; or a charity of the donor's choice.

To order memorial trees or send flowers to the family in memory of Enyeart Crume Jr, please visit our flower store.