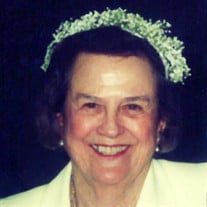 Emily Eatherly Toomer of Oak Ridge died on Wednesday, August 21, 2019 in her home surrounded by her family. She was dearly loved and will be always missed.
The daughter of Horace and Mary Smith, she was born in Bakersfield, California. She grew up in both Bakersfield and Hollywood. In 1944, Emily married Walter Eatherly when he was serving in the Army and she was working at a war-time aircraft manufacturer. They had three sons, all born in California. After World War II, they relocated to Illinois, Ohio, and finally to Tennessee. While living in Lawrenceburg, Tennessee, Emily started a new chapter of the League of Women Voters to help people engage in the elections. She was an avid golfer and loved playing bridge with her friends. Emily was recognized in Knoxville, Tennessee for breast cancer fundraiser. Her husband, Walter, passed away in 1999 after 55 years of marriage.
Emily was a member of St. Stephen's Episcopal Church. That is where she met and married Chap Toomer in 2001. They have been married for eighteen years.
Emily is survived by her husband, chap; two sons, Walter Scott and his wife Janie, of Crossville; Richard Eahterly and his wife, Diana, of White Salmon, Washington; her daughter-in-law, Sally Stern of Fresno, California; six grandchildren: Jennifer, Andrea, Jonathan, Christopher, Tina, and Keith Eatherly; and two great-grandchildren: Kameron and Keith Eatherly.
Emily was preceded in death by her parents; her former husband, Walter Eatherly; her son, Charles Eatherly; her brother-in-law, Scott Eatherly; and her granddaughter, Amy Eatherly.
A memorial service will be held at 1pm on Wednesday, August 28, 2019, in St. Alban's Chapel at St. Stephen's Episcopal Church in Oak Ridge.
In lieu of flowers, the family requests that any memorials be in the form of donations to st. Stephen's Episcopal Church, 212 N. Tulane Avenue, Oak Ridge, TN 37830.

To order memorial trees or send flowers to the family in memory of Emily Toomer, please visit our flower store.