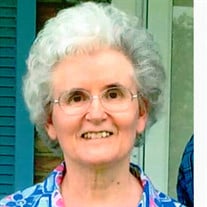 Doris Elaine Griffin left this life peacefully on February 19, 2019 while resting in her home. She was 69 years of age, born September 02, 1949 in LaFollete, Tennessee to parents Victor and Lorene Henegar. She graduated from La Follette High School in 1967, valedictorian of her class. She subsequently enrolled in the University of Tennessee in Knoxville and graduated with a Bachelor of Science Degree (with honors) in Education, majoring in Social Studies in 1971. After teaching in LaFayette Georgia, she moved to Oak Ridge, and began to work at what was then called the Office of Scientific and Technical Information, a position she held for many years. She was a fine Christian lady and was a member of the Baptist faith since childhood. She was preceded in death by her parents, her first husband Burton Lee Saylor, her sister-in-law, Julie Gordon Henegar. She is survived by her husband Guy Griffin, her brother Allen Henegar, and his life partner Pam Lawson, her son Kevin Saylor (wife Nicole) and her grandchildren Kai Juniper, and Grayson. Other survivors are her step-daughter M. Sue Dolislager (husband Fredrick) and step-grandchildren Gerritt and Carolina. Also, we would like to acknowledge Jodi Whalen, Doris' special friend since early childhood. Private visitation for the family will be held at Martin Oak Ridge Funeral Home on February 22, 2019 with interment at Oak Ridge Memorial Park on the same day. The family thanks profusely the excellent and kind care shown be her caregivers, Patricia Phillips, Loretta Bunch, Amanda Columbus and Wilma Daugherty. Rest easy dear one, until we meet again. Expressions of love may be made by memorials in her name to Central Baptist Church, 130 providence Road, Oak Ridge, Tennessee 37830 Services entrusted to Martin Oak Ridge Funeral Home 865-483-4341

To order memorial trees or send flowers to the family in memory of Doris Griffin, please visit our flower store.