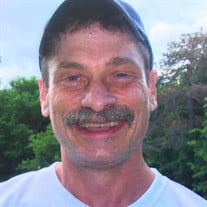 David Wallace Fairfield was born March 26, 1965 in Billings, Montana. He played football at Nevada High School in Nevada, Missouri where he graduated in 1983. He continued a passionate love of sports and was an avid fan of the Auburn Tigers, Kansas City Chiefs, and Chicago Cubs. He enjoyed collecting baseball cards, watching movies and playing games with his family. He loved to build things, especially for his grandson Emerson. He also loved animals of all kinds, especially his dog and best friend, Winston.

He was preceded in death by his mother, Mary Caroline Ayles, and father, Wallace Arrington Fairfield, Jr.

He is survived by his half brother and sister, Benjamin Fairfield and Megan Nolan; his stepbrother Ian Poertner; his son-in-law Justin Murr, and his absolute pride and joys: his daughter Ashley Fairfield and his grandson Emerson Fox.

The family will receive friends from 5-7pm Friday July 6th, 2018 at Martin Funeral Home in Oak Ridge, TN with the funeral service to follow at 7pm. Expressions of love in lieu of flowers can be made as memorial contributions to STAR: Shangri-la Therapeutic Academy of Riding 11800 Highway 11 E Lenoir City, TN 37772, or to St. Jude Children's Research Hospital.

To order memorial trees or send flowers to the family in memory of David Fairfield, please visit our flower store.