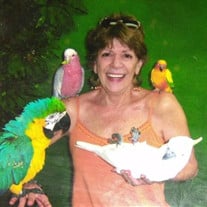 Celia Ann (Candy Jones) Thacker age 73 is in the care of Martin Oak Ridge Funeral Home. Candy passed away Sunday November 25, 2018 in Tazewell, TN She was born February 17, 1945 in Norfolk,Virginia at Naval Base Hospital to Carl Jones and Jean King Baxter. Candy was a graduate of Oak Ridge High School class of "63" and was an Oak Ridge High School Cheerleader during National Champs; was a winner of Busch Plant Pool Tournament televised on ESPN. She worked for a General in Washington, DC immediately after high school graduation (She knew President John F. Kennedy) and was at Patrick Air Force Base in Melbourne, Florida and was a go-go dancer in the 60's in New York City where she met upcoming music icons such as B. J. Thomas. Candy enjoyed many things throughout her life and was an avid sportsman but also had time for her hobby of jewelry making, sewing, and Ju-Jitsu. She was preceded in death by her parents Carl Jones and Jean King Baxter. And sister Carla Jean Jones. Candy is survived by her son, Chadwick E. Busby of Knoxville, TN ; granddaughter, Abbey Busby of Farragut, TN; grandson, Tyler Busby of Farragut, TN; brother, Larry K. Jones of Oliver Springs, TN; sisters, Sheri Jones and husband Bob Williams of oak Ridge, TN, and Tara Lee Muraco of Oliver Springs, TN; Nephews, Nick Suttles, Colt Messer (Ashley) of Knoxville, TN, Chase May (Jeremy) of Oak Ridge, TN, Marc Messer (Hannah) of Lexington, KY and Michael Muraco of Pittsburg, PA and a host of other relatives. Special friends Herb Bowden and Michael Ritter and her beloved cat Sassy. Candy's wishes were to donate her body to science at U.T. Medical Center. No services are planned at this time. Online messages may be left for the family at www.martinfuneralhomeoakridge.com . Services entrusted to Martin Oak Ridge Funeral Home 865-483-4341

To order memorial trees or send flowers to the family in memory of Celia Thacker, please visit our flower store.