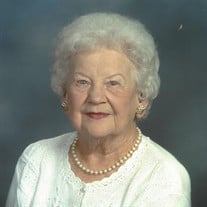 Cecilia D.Klemski--Oak Ridge Pioneer 1919-2016
Cecilia D. Klemski passed away at Greenfield Senior Living on Monday October 24,2016 where she was residing since July 2012.She was born in Shenandoah, Pennsylvania in May 1919 to Polish Immigrant parents and her father worked in the area coal mines. She graduated high school in Shenandoah and worked as a secretary at the State Department in Washington, DC and then for the Manhattan Project in New York City before coming to Oak Ridge in August 1943 as one of the first group of workers to the "secret city" which was detailed so eloquently by Denise Kiernan in the book "The Girls of the Atomic City." She had stories of taking dictation from General Groves or "GG" as he was know in those days. She met her husband, Henry, in Oak Ridge and they were married in January 1945. She was dedicated to her family and to St. Mary's Catholic Church of which she was one of the original members and attended the first offering of mass in the Secret City. She was active in CCW and washed and ironed the church linens for over 50 years, cleaned and decorated the altar and so many other jobs when asked, but she is still especially remembered as the manager of the St. Mary's school cafeteria and 20 years of serving delicious home cooked meals to the students.
She is survived by two sons, Jim of Sierra Vista, Az.,John of Oak Ridge, a daughter Bonnie Shelton of Marietta, Ga., two granddaughters, Lisa Burns of Marietta, Ga. and Rachel Shelton of Napa, California, two great grand children, Austin and Mikey Burns, and a sister Cathy Parker of N. Augusta, S. C.
The family wishes to express gratitude to the staff of Greenfield Senior Living and Covenant Hospice for their loving care and compassion,
Family will receive friends Friday October 24 at 10:00 AM at St. Mary's church with funeral mass to follow at 11:00 AM, burial will follow at Anderson Memorial Gardens. A reception is extended to all at 112 Artesia Dr. in Oak Ridge from 2:00-4:00 PM.

Any memorials and in lieu of flowers, the family requests to be in the form of contributions to the renovation fund at St. Mary's Catholic Church, 327 Vermont Ave., Oak Ridge or their favorite charity

To order memorial trees or send flowers to the family in memory of Cecilia Klemski, please visit our flower store.