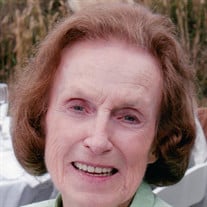 Catherine Frances Carroll Gorder passed peacefully in Oak Ridge on March 23, 2017. She was 92 years old. Catherine was a resident of Oak Ridge for over 70 years.
Cathy Gorder was born on May 16, 1924 in Rutherford, North Carolina to Howard and Edna Benson Carroll of Forest City, North Carolina. Cathy spent her younger years living between Forest City, North Carolina and Hurtsboro, Alabama. Her father was in a lumber business with his brothers in Hurtsboro, Alabama, and later moved the family to Forest City. After graduating high school in North Carolina at age sixteen, she attended Montevallo College, then an all women's college in Montevallo, Alabama. She graduated in 1943 at the age of nineteen with a degree in Home Economics with a concentration in chemistry. While finishing up her degree, she was recruited for a secret job by Tennessee Eastman who took an interest in her chemistry background. Unbeknownst to her, she was soon to become an Atomic City girl. She arrived by train in Knoxville, was treated to a steak dinner at Regas, and bused to her new home in the Secret City where she started work as a chemical lab analyst. She continued to work for Tennessee Eastman through the end of the war and worked at Y-12 Analytical Laboratory until August 1953.
She married the love of her life Winfred Arthur Gorder on December 15, 1951 who she affectionately called Wiff. On their honeymoon they encountered more than the usual obstacles leaving Oak Ridge. First they were detained at the western checkpoint by some practical joking guards, then they had to endure a smelly exhaust due to some chemists adding "something" to their gas tank. Finally they drove though a historic snowstorm to celebrate their honeymoon night in Chattanooga. Cathy retired from the lab in 1953, to start a family, giving birth to the first of three children Gary, followed by Karen and Greta. She was a devoted loving mother to her precocious brood and grandchildren in this historic town.
Cathy was a passionate master gardener and always had room for just one more plant in her garden. She loved native wildflowers and ferns, and was always on the lookout for the newest perennials of the coming year. She spent long hours designing her large garden overlooking the Cumberland Mountains. She loved the many beautiful birds visiting her garden-becoming an enthusiastic backyard bird watcher. Cathy was intellectually active, always in the know about current world affairs, history, and politics and an avid reader of periodicals and books of all subjects.
Cathy is survived by her three children, Gary Gorder of Seattle Washington, Karen Gorder of Seattle, Washington, and Greta Gorder of Sea Cliff, New York, her grandchildren Riley Gorder of Seattle, Washington, Amanda Scheer and Samantha Scheer of Sea Cliff, New York, and her brother and sister-in law, John and Betty Gorder of Gilbert, Arizona. She is preceded in death by her husband of thirty one years, Winfred Arthur Gorder and her brothers Lafayette Carroll of Hurtsboro, Alabama, and Bruce Carroll of Mobile, Alabama.
The family would especially like to thank Angie Woods, her long time caregiver, for her kindness and thoughtful care of our mother these past years.
The reception and funeral service for Catherine Gorder is scheduled from noon to 2:00 PM, Friday, March 31 at Martin Funeral Home, 1017 Oak Ridge Turnpike. Reverend Tom Job will perform the service. All are welcome to attend and celebrate Cathy's life. In lieu of flowers, please plant a flower or tree. Donations may be sent to the University of Tennessee Arboretum Society, PO Box 5382, Oak Ridge, TN 37831-5382. Online messages may be left for the family at www.martinfuneralhomeoakridge.com . Services entrusted to Martin Oak Ridge Funeral Home.

To order memorial trees or send flowers to the family in memory of Catherine Gorder, please visit our flower store.