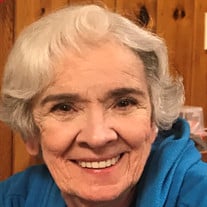 Betty Lonora McMillin Whalen, 75, loving mother, grandmother, sister and dear friend, took her final breath on earth on Mother's Day May 12, 2019 at Methodist Medical Center in Oak Ridge.
Betty was born December 15, 1943 in Knoxville, TN, but she grew up in Oak Ridge. She married young and became a military wife. She traveled the country from Virginia to Jacksonville and finally California. Betty believed her purpose in life was to be a mother. In May of 1973 her dream became a reality when her oldest son was born. After the birth of her daughter in 1979, she returned to East Tennessee with her family settling in Oliver Springs. As her children grew up, she spent many of her days at little league ball fields, coaching, keeping score, and being their biggest cheerleader. Betty retired from the Department of Energy in 1996, where she was a hearing coordinator for the office of personnel management. After retirement Betty found joy in volunteering. She volunteered locally with the literacy council, as well as the contact help line.
Betty was a devout Christian. She grew up attending Central Baptist Church in Oak Ridge and became a member of Mount Pisgah Baptist Church in Oliver Springs upon her return to East Tennessee. After moving back to Oak Ridge in 2004, she began attending Faith Promise Church where she was active in several areas of ministry. Betty was involved with numerous bible studies and always thirsting for a better understanding of the word and a deeper relationship with Christ.
Betty loved to travel, especially to the beach. She loved to sit at the edge of the ocean and watch the waves roll in. She was an avid reader with an extensive personal library, as well as a skilled crocheter. But her true passion was her family. There was no greater joy to her than her children and grandchildren.
Betty will be forever remembered and cherished by her daughter Trish Brown and husband Kenny, her son Alex Whalen, her grandsons William, Matthias, Micah, Merrick, Triston, and Zac, her granddaughter Cassidy, her sister Betsy Horwedel and husband Jim, and her aunt Frances Ward. As well as a host of nieces, nephews, extended family, and dear friends.
She was proceeded in death by her parents Casie and Grace McMillin, her son William Joseph "Billy Joe" Whalen, and her brother Jerome "Billy" McMillin.
Receiving of friends will be held on Tuesday May 21, 2019 from 5-7pm at Martin's funeral home in Oak Ridge, TN. The service will immediately follow, with Pastor Garvin Walls officiating.
Betty was an incredible woman, amazing mother, cherished grandmother, faithful friend, and there is no doubt in the minds of anyone left behind that she will hear, "Well done, good and faithful servant!"

To order memorial trees or send flowers to the family in memory of Betty Whalen, please visit our flower store.