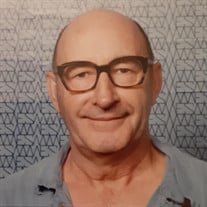 Arlis Burton Wells, 95, passed away on Tuesday, September 22, at home. He was born in Campbell County, Tennessee, to Perry and Dewey Wells. He lived most of his life in East Tennessee, but an adventurous spirit sent him all over the United States to live and work. He visited 49 of 50 states, and one of his great regrets was that he never got to travel to Hawaii.

His dry wit and calm strength helped him weather a life that by most standards was anything but easy. He was a child of the great depression-his father died when he was in 8th grade, forcing him to quit school to work the family farm. He worked with the Civilian Conservation Corp in Washington state to fight forest fires before joining the US Army. He served on the front lines in Germany during WWII and helped liberate a concentration camp. He was a wizard with his hands and could repair or build just about anything. He was married to Joy Gilmer Wells for 63 years before her death.

He is preceded in death by his parents, his sister Arlene Bridges, brothers Bill and Don Wells, and his wife Joy. He is survived and will be greatly missed by his two sons David Wells and Joe Wells, daughter Mary Cawthorn and son-in-law Richard, grandchildren Donna Jo Wells, Erin Gomez, and Alex Owen, great-grandchildren Oscar, Daniel, and Frankie, brothers Robert and Charles Wells, cousin Eva McCarthy, and many nieces and nephews. The family would like to thank Dr. Ann Carter for her many years of friendship and caring service to Arlis.

Graveside services for family will be at Robertsville Cemetery on Monday, September 28, at 12 p.m., with a gathering at the small pavilion in Bissel Park in Oak Ridge to follow. It is requested that masks be worn for the ceremony

To order memorial trees or send flowers to the family in memory of Arlis Wells, please visit our flower store.