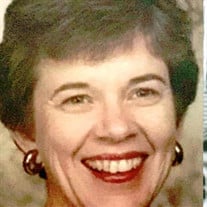 Angelyn (Puckett) Redford, age 91, is in the care of Martin Oak Ridge Funeral Home. Angelyn also known as Angie by her friends and family, passed from this Earth to her heavenly father on September 5, 2019. Angie was born November 27, 1927in Huntingdon, Tennessee to John M. Dill and Lela Bennett Dill. She was the youngest of eight.
During her school years she excelled academically and athletically, achieving the highest academic award in her senior year, was acting secretary of her student council, played on the girl's basketball team and was a cheerleader.
After graduation, in 1945, she attended business school in Paris, Tennessee. Later she moved to Memphis, Tennessee and met the love of her life, Powell Puckett. They were married in 1957 and moved to Oak Ridge, Tennessee after welcoming their first child together, Gary Louis Puckett.
She remained an at home mom, raising Gary and his sister Ellen and Sydney (deceased in 2018) until 1969 when she entered the work force. Angie was employed with the Social Security Office for several years and then continued her career at O.R.N.L. (Oak Ridge National Laboratory).
She was a Christian woman and of the Presbyterian faith and served as a deacon at First Presbyterian Church in Oak Ridge, Tennessee.
Sadly, her husband Powell passed away in 1988. Until then they enjoyed ballroom dancing and traveling the country in their mobile camper. They were also active Elks Club and Lions Club members.
In 1991 she married John L. Redford. As both enjoyed dancing they embarked upon many active, competitive years in ballroom dancing around the country.
After John's death in 2009, she moved to Texas, and then to Florida, to be with her children. Then in 2013 she returned to her beloved Tennessee.
She was a resident at Morning Pointe Assisted Living in Clinton, Tennessee where she was loved and well cared for by a wonderful staff.
Angie is survived by her son, Gary Louis Puckett (estranged) and his wife, Cindy: children: Billy, Alisha and Stephanie, along with 6 grandchildren: and by her daughter Ellen (Puckett) Amuso and her children, Nolan Powell Amuso and Rachel Katelynn Amuso.
"Remembrance in life's passing
Is the truest form of love on can give,
For a memory should never die
And a love should live forever in the heart of another"

Expressions of love can be made in lieu of flowers to Caris Healthcare 10651 Coward Mill road, Knoxville, Tennessee 37931

Online messages may be left for the family at www.martinfuneralhomeoakridge.com

To order memorial trees or send flowers to the family in memory of Angelyn Redford, please visit our flower store.